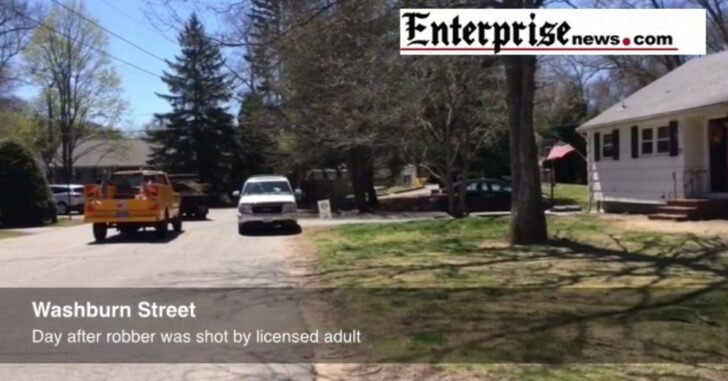 BROCKTON, MASSACHUSETTS — A 15-year-old boy was pretending to have a dirt bike for sale and made arrangements to meet with a potential seller. The price negotiated: $700. In advance, the teen purchased a BB gun to stick the buyer up and rob him.

Plot twist: The buyer was armed with a real gun.

As soon as the teen produced the BB gun, a struggle ensued for control over it. Had this been a real gun, the buyer in this case could have made a grave mistake.

“They were fighting over the BB gun and, at that point, the victim in the case pulled out a real gun and fired three times,” [Brockton police Lt. Kenneth] LeGrice said.

The man reached into his white pickup truck, pulled out a 9-mm handgun and fired at the teenager three times, striking him once, LeGrice said.

The teen tried to take off, but collapsed down the road. He was taken to the hospital, and his condition was not known. He is being charged with armed robbery while masked.

When researching Massachusetts law on concealed carry (where this incident occurred), it seems that the victim had a permit to carry but chose not to carry his firearm on his person. That time taken to retrieve the firearm from his vehicle could have cost him, had the teen been armed with a real gun.

“I would have reacted the same way. If my life was threatened, be it a BB gun or not, you don’t know,” said Joe Hanson, who lives nearby and heard the gunshots. “If they take the orange tip off, it looks the same.”

Previous article: The Three Biggest Mistakes A Concealed Carrier Can Make Next article: Armed Citizen Shoots And Kills Drive-Thru Robber While Getting Lunch With Son