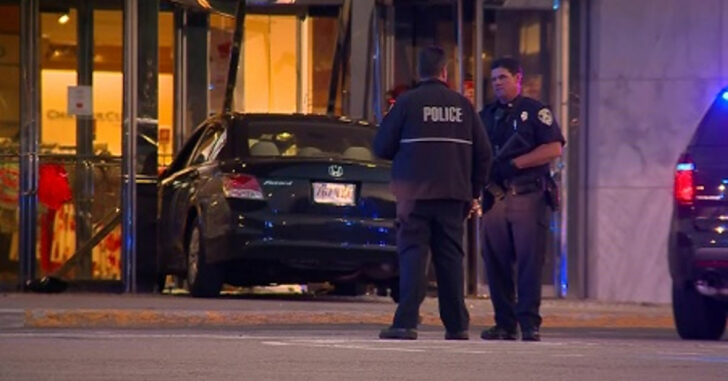 TAUNTON, MASSACHUSETTS — Neighbors were allegedly helpless to watch as a man violently entered a woman’s home and stabbed her and her daughter. They stood by and watched as he fled the scene only to steal a vehicle and then drive it into a nearby Macy’s. The stabbing continued until he was finally shot and killed by an off-duty police officer.

Standing by and watching a violent crime take place and doing absolutely nothing — that’s a “gun free zone” mentality. Thankfully, at least one off-duty police in the Commonwealth of Massachusetts demonstrated a willingness to intercede and stop it according to WMUR.

The slain murderer, in this case, appears to have gone completely out of his mind according to witnesses talking to WMUR. After the first crash that happened in the neighborhood of the mother and daughter, this bad guy allegedly stole a vehicle and raced around like a mad man doing whatever damage he could manage until being put down like a rabid dog.

“I came out and I heard girls running and people screaming, ‘There’s a guy,'” she said. “We’re used to guys entering the store, so we thought he must have had a gun. I ran with them. I was scared.”

Great. Get to safety. Watch helplessly as more people get attacked and mauled by a mad man. This is precisely why we need more responsible, trained concealed carriers and why imposing arbitrary gun restrictions on otherwise law-abiding citizens is both ridiculous and inane.

“All of a sudden, he walked into Bertucci’s and I saw him just start stabbing people,” one witness said. “And there was someone with a chair trying to throw it at (the suspect). There was an off-duty police officer there, and he actually shot him and kept him down.”

To the man in Bertucci’s that got up and attempted to protect himself and others: good job. You may not have known there was an off-duty police officer right behind you ready to put this guy down, but you stood and fought.

We generally advocate avoid, deny, and then fight. People have families they want to go home to, places they want to go, things they want to do. That’s understandable. And it’s impossible to know what conditions gave way to create the sort of madness within this man whereby he felt compelled to attack multiple people in multiple locations on a spontaneous whimsy. That said, I will always applaud and respect deeply those who are willing to sacrifice their own well-being to defend the lives of themselves and those around them.