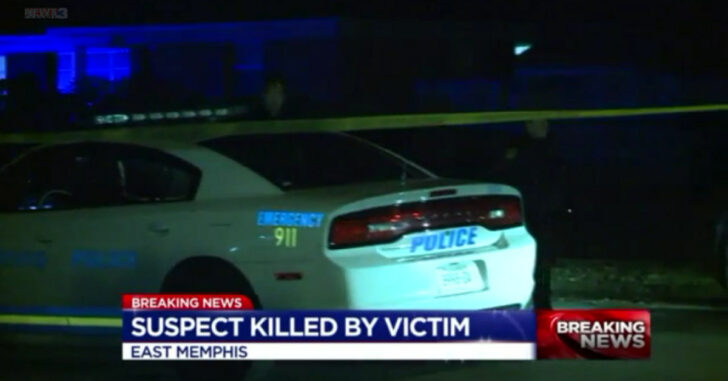 MEMPHIS, TENNESSEE — A man was parked outside a residential home having a discussion with another person when thugs ambushed his car and opened fire on him. He was reportedly hit once in the side and sustained a non-life-threatening gunshot wound. The victim quickly got his own gun and returned fire on the suspects. The victim scored a direct hit with one thug collapsing with a gunshot wound to the chest.

WREG reports that the thug’s buddies loaded him into their car where they reportedly transported him home. According to police, the thug’s mother drove him to a nearby medical center where he later died. His two accomplices are believed to still be at-large and the police haven’t had much success in identifying them based upon shoddy descriptions.

The victim is expected to make a full recovery.

This just goes to show that robbers are living in fear of their victims being armed. These thugs opened fire on the occupants of the vehicle without even knowing if their intended victims were even armed. That shows the type of shoddy temperament that concealed carriers need to be aware of. We can’t always count on the bad guys giving us a chance to breathe.

On the flip side, this is an idiotic move on the criminal’s part because instead of simply being charged with lesser crimes involving armed robbery, they’ll now be getting charged with assault with a deadly weapon, possibly manslaughter and attempted murder. The suspect who died was only 16 years old. They’re starting these kids young and they’re putting them in the front lines of this fight. We’re sadly going to have to be prepared to deal with that, too. And as the mother obviously didn’t immediately identify the two suspects who helped her son get killed, we can only assume that law enforcement is going to have their hands tied behind their proverbial backs on this one.

Stay prepared, keep your wits about you, and carry every single day.

Previous article: The Three Biggest Mistakes A Concealed Carrier Can Make Next article: Armed Citizen Shoots And Kills Drive-Thru Robber While Getting Lunch With Son