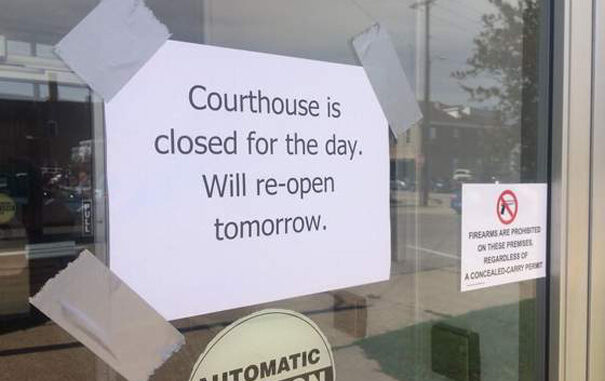 A 71-year-old man in Iowa was mad about his property tax increase during a public meeting. He was so mad in fact, that he pulled a pistol out of his suitcase and fired at the assessor. Luckily, the bullet missed it’s intended target.

One of the three Supervisors,  Larry Koos, stepped in and struggled with the shooter, and the shooter was ultimately shot and killed.

It is unclear whether the shooter shot himself, or if Koos was able to wrestle the pistol away from him and fire the shot. Witnesses say that the shooter’s finger was on the trigger during the struggle, so it is entirely possible that he shot himself.

The courthouse does not have any specific security protocols in place, but will sometimes send over a Deputy with a handheld metal detector to give people a quick look when entering the building.

It seems that during this meeting, there were no legally armed individuals present. If it’s anything like the town I’m in, it is illegal to carry your firearm inside the courthouse. Actually, take a look at the image above. See that ‘no firearms’ sign to the right? Everyone in that room is lucky that Koos sprung into action as quickly as he did. Had he not, mixed with no one else with a firearm in the room, bodies could have started to pile up.

The shooter did not have a permit to purchase or own a handgun.

Previous article: Here Is Why You Don't Bring A Can Of Mace To A Gun Fight Next article: Parent Pulls Gun On Son's Football Coach Over Playing Time In An Upcoming Game. Wait, What?