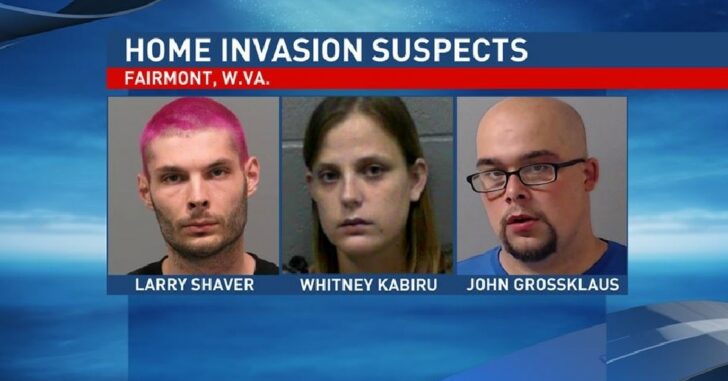 FAIRMONT, WEST VIRGINIA — Preying upon the hospitality of strangers, police are alleging that 23-year-old Whitney Kabiru approached the door of an 80-year-old man’s home and asked for help. When the elderly man opened the door, two men attempted to rob him with a BB pistol, according to a press release from the Fairmont Police Department. And for those two men, they couldn’t have made a worse mistake.

As WBOY 12 News reports, by the time Fairmont police arrived at the scene, Larry Shaver, 28, was found dead in the road with a gunshot to his head and neck area. His accomplice, John Grossklaus, 28, was recovered across the street from where the attempted robbery took place with a bullet through his abdomen. After taking Grossklaus to the hospital for treatment for his gunshot wound, he was arraigned in a local magistrate’s court.  The judge set his bond at $250,000.

Police detectives are still investigating to see if Shafer and Grossklaus were behind other felonious robberies reported in the area. Grossklaus was on parole at the time of the crime and has been held on a state parole detainer.

Detectives have concluded that the homeowner believed his life was directly in jeopardy.

“It appears the homeowner had reason to believe that his use of force was necessary to defend himself against a perceived imminent use of unlawful deadly force.”

The name of the homeowner was not released for personal security reasons.

The woman who assisted the two men in the attempted armed robbery will also be charged with crimes relating to conspiracy and robbery. The police report that she initially attempted to flee the scene after the homeowner defended his life from what appeared to be an armed suspect and his partner-in-crime. She was later apprehended.

Just goes to show: age is just a number. When it comes down to defending your life and your property, there’s just no substitute for a good home defense pistol.