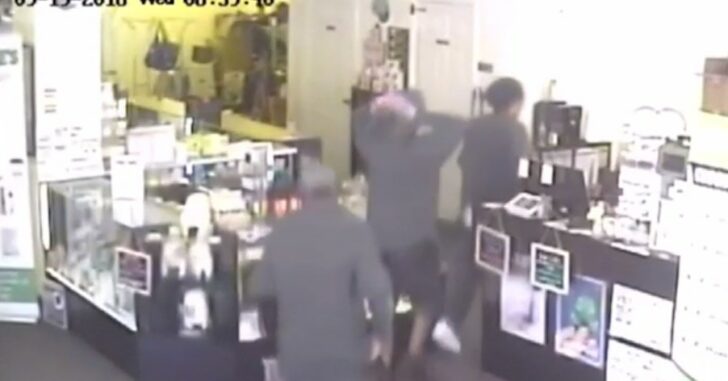 SAVANNAH, GEORGIA — An armed employee is happy that he had his firearm with him while opening up shop at work one day in September. The bad guys, armed as well, were probably not expecting the armed resistance that they found themselves up against.

“I opened up the store that morning,” said Jerry Lawrence. “It was maybe around 10:20, 10:30 when they came in. I thought they were just regular customers.”

The two men who came in were looking for money and goods, and they had fire power to back up their attempted heist.

All of a sudden, Lawrence hears “go ahead and give it up. Turn back around.”

Security cameras captured the incident, and you can view that footage here.

As soon as Lawrence saw a firearm in one of their hands, he drew his own firearm and told them to get out. The two men ran off, and left with nothing but shame and humiliation.

But what Lawrence does next is why we have to pick this apart just a bit.

Once the men left the building, Lawrence chased after them. It didn’t stop there, however. Once outside, he says that the two men looked like they were going to turn back around towards him, so he fired two warning shots.

This can cause a mess in a hurry, and Lawrence would have been better off locking the door to the store and calling police. You never know what you’ll get yourself into when you chase after the bad guys, and you definitely don’t want to be firing warning shots in the vast majority of cases.

Luckily, Lawrence was not injured during the attempted robbery, and let’s hope he keeps his firearm close at hand in case something else like this happens in the future.