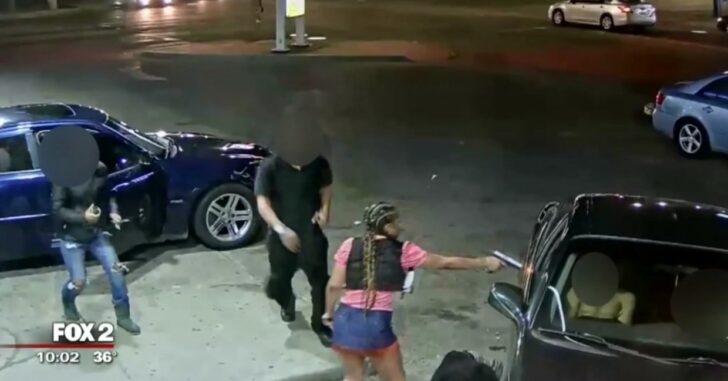 UPDATE: The female suspect has been arrested and is in custody.

DETROIT, MICHIGAN — This woman is going places. Like jail. Police are looking for the public’s help to identify this female shooter after she was captured on HD surveillance video firing shots at a vehicle in a gas station parking lot, striking the driver multiple times.

The woman is seen on video going into a vehicle and pulling out a gun, and then putting it somewhere under her skirt. She then walks over to another vehicle, apparently during a heated argument, and opens fire on the people inside.

The driver of that vehicle was struck multiple times, and the injuries are said to be non-life threatening.

Whether this is gang-related or not is still to be determined. It could have been a case of some high-level road rage, but we won’t know until more details come out.

In any event, it’s best to GTFO of the area if something like this is happening around you. I’m sure there are fine folks of Detroit who could have been at the gas station while this was happening.

The people, seemingly in her group, were a little more level-headed and tried to stop her from firing the gun.

Steer clear, take cover, and be ready to fight back if necessary.

Previous article: Post Office Gun Free Zone Appeal Won't Be Heard By The Powers That Be Next article: Armed Intruder Kicks Down Bedroom Door, Is Shot By Homeowner On Other Side