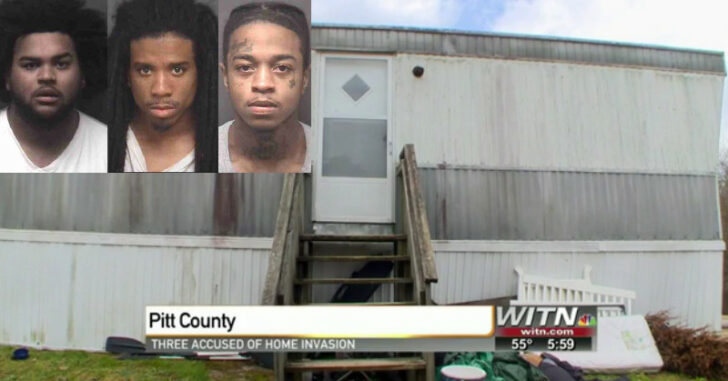 PITT COUNTY, NORTH CAROLINA — Three blind mice, three blind mice.  See how they run, see how they run…  Three home invaders in Pitt County were met with armed resistance when they broke in through the back screen porch of a trailer home of a couple and their newborn.  Thankfully, the father was able to get to his revolver in time to return fire after they stormed in with a shotgun.

Apparently, none of the three were expecting to meet victims capable of defending their home.

[The mother] grabbed her son and ran to a back room, while she says [the father] managed to get his revolver and unloaded the weapon, firing six times.

According to WITN, the three assailants dropped their shotgun and fled immediately from the premises.  The assailants were recovered by the police after these individuals crashed into a ditch.  Danny Lewis of Greenville was recovered from the vehicle with a bullet wound in his arm and taken to Vidant Medical Center to receive care.  His two accomplices, Ryan Aytch of La Grange and Dashawn Dail of Kinston were both charged with first degree burglary and attempted robbery with a dangerous weapon.  Lewis is expected to join them shortly after he recovers from his injuries.

It doesn’t seem like these three really thought out their plan very well.

While far be it from us to sit back and judge another man defending the mother of his child and his newborn from armed intruders, this is a great reminder for concealed carriers to always keep that gun nearby.  If you have a newborn or a young child in the house, keep it in a secure inside the waistband concealed carry holster that has great retention and is comfortable for you.  You never know when the Three Stooges will decide to make a surprise entrance through the back door.