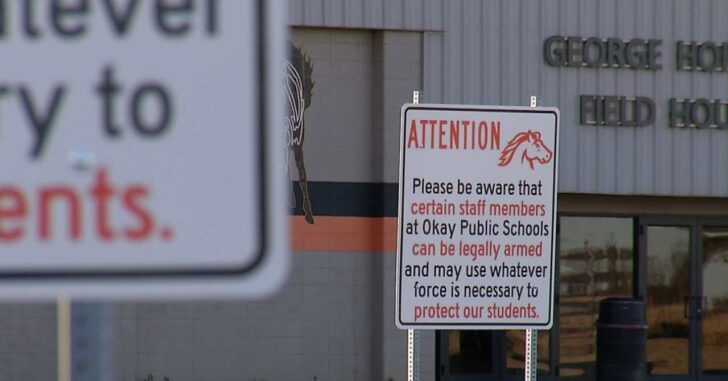 The sad reality is that, if you’re the parent of school age kids, you need to be concerned whether or not your school has an effective plan for dealing with some whack job coming in and threatening the lives of the students. I don’t mean JUST an idiot with a gun but also anyone intent on doing harm to innocent students, eg. the mass stabbing at Franklin High School in Murraysville, Pam, April of 2014, where 22 people we stabbed or slashed.

The  plan schools currently  have in place is to post a sign at the entrance declaring the school a weapon (GUN) free zone. I can only assume the thinking behind these prosaically worded edicts is that the bad guy will see the sign, shrug his shoulders in disappointment and turn away to find a place that allows him to bring his implement of choice on campus. Sounds “reasonable”, I mean labeling schools as “drug free” has eliminated the drug problem right?

What if someone does ignore the sign (why would anyone ever do such a thing?) and comes into the school to do harm? The “action” plan in almost every school is simple; Don’t try to stop him/her but instead, run away, lock yourself up and wait 5-10 minutes for the police to arrive to “recon” the situation while the bad guy roams the halls targeting those who couldn’t find a safe place fast enough. BRILLIANT!

I think you can detect a dash of sarcasm and dab of distain regarding the current “gun free zone” mentality . But my faith in American education has been restored by smart folks like those in rural Okay, Oklahoma (just outside Tulsa) who have posted a signs at their schools that say the following:

Please be aware that certain staff members at Okay Public Schools can be legally armed and may use whatever force is necessary to protect our students.

The school district Superintendent Charles McMahan was quoted as saying, “Having a sign in your front yard saying ‘this is a gun-free zone’ just tells the idiots, “Come on in,” because we can’t defend ourselves…. Being a small, rural school, we’ve always been trying to figure out what’s best for our kids security-wise,” (tulsaworld.com)

If there was a Nobel prize for common sense, I’d like to personally present it to Mr. McMahan and wrap it up in the second amendment. This guy is a unicorn, a public official who understands not only a person’s fundamental right to protect himself but a school’s obligation to provide the safest environment possible for our children; to not only prevent violence but to also have a solution to protect children if the need arises.

The specifics of the policy also make sense. Oklahoma requires anyone who carries a handgun on school property to have a valid concealed carry permit . The Okay schools, however, take it one step further and require those staff members protecting the kids to also be certified by the Council on Law Enforcement Education and Training.

Thankfully Okay, Oklahoma is not the only state-sponsored program brave enough to confront the divisive issue of providing schools with the viable and real world savvy tools to protect their pupils.

The necessity for an integrated plan of prevention and protection has been common place in schools for years, the logic just needs to be extended from one potential danger and applied to another. All Schools have programs for fire prevention in the form of fire safety instruction, fire drills, etc. . These programs however don’t stand alone and are accompanied by the tools necessary to actively protect lives when the prevention program fails; sprinkler systems, fire extinguishers and school personnel specifically trained to use these tools protect lives as they find safe haven before the authorities arrive. No school would just merely put a sign up saying “fire free zone” and forego fire extinguishers, in fact the government wouldn’t allow it to happen. Nor would a school encourage students to run and hide if the fire alarm goes off. It’s worth noting that b/w 2009-2011 there were an estimated 1,600 intentionally set school fires reported with no known deaths reported, (source USA.Fema.gov) largely because these active fire protection systems worked.

The same logic must be applied to handling the potential of mass violence in schools. There’s no argument that prevention is necessary; limited access, active shooter drills, ID checks etc.. But, as with fire safety programs, it only makes sense that schools implement an integrated well thought out protection program that includes providing trained school personnel with the tools to protect students while they find safety as they wait for the authorities to arrive.

Thankfully more and more schools are realizing that only an integrated plan of prevention AND protection will mitigate a situation in which seconds matter but help is minutes away.

Gordon is Freelance Writer and Photographer specializing not only in Firearms but also the concealed carry lifestyle and culture. Gordon has been a long time shooter, shooting and competing in as many disciplines as possible. He has a unique perspective that has been developed from his time working in the marketing department of a major gun manufacturer as well as years spent as a stand up comedian.

View all posts by Gordon Meehl