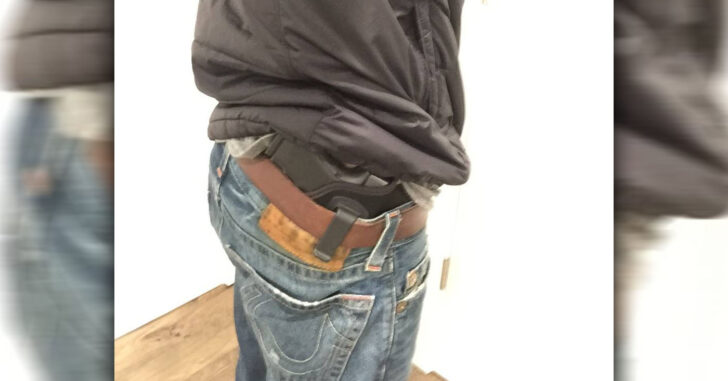 I am a licensed Tennessee Realtor and I am also licensed to carry a concealed weapon in the state of Tennessee.

My wife and I are currently in the market to buy our first home and have been looking for our perfect home for about 6 months now. In this time we have toured dozens of homes, sometimes in the company of the listing agent and sometimes alone. Due to the vulnerable nature of this process, I carry my Glock 19 (concealed, as pictured) for every showing. My wife isn’t a fan of guns and often gives me grief for it…poking fun at me and joking that I’m “hyper paranoid” while claiming that guns seriously make her uncomfortable. Her concerns are, of course, valid because guns (in the wrong hands) can be quite terrifying. However, as I like to tell my wife, “the odds of me needing to use my firearm in defense are one-in-a-million, but I’d rather carry my weapon 999,999 times and never use it, than to not have it the one time I do need it to protect myself or (more importantly) my family”. Thus, I carry my trusty Glock 19 most everywhere I go.

Well tonight, while we were touring the last house of the day, my wife and I learned the true value of carrying a concealed weapon…

As we climbed the steps to the front door, my wife recited the lockbox combination that we would need to use to access the house. Moments later we were stepping through the front door, into the home’s entryway, when we heard a loud thud from upstairs. Nervously I called out, “hello? Is someone here?”. In response, a soft voice uttered, “oh, shit…yes…hello.” No one came to the top of the stairs to greet us as my wife and I exchanged confused looks.

With my hand resting on my Glock beneath my shirt, I walked to the back of the house to find the rear door wide-open. Whoever was upstairs had entered through the back alleyway and was likely not supposed to be in the home. Suddenly, we heard footsteps coming down the stairs as a grungy Hispanic man with tattoos all over his neck and hands came lumbering into the family room.

He was drenched in sweat and began making nervous small talk with us. My hand never left the butt of my Glock as he babbled on about being interested in purchasing the house (although he clearly knew nothing of the home…he didn’t even know the ballpark price range of the home). Meanwhile, at least one other person was still upstairs making a lot of noise. It wasn’t more than a minute before my wife and I were able to confirm that the man was certainly not supposed to be there. During that time, he followed us all around the downstairs, keeping an eye on us while his partner labored away upstairs. We were alone in the house with this person who had obviously forced his entry into the home and it was clear that he wasn’t about to back down.

Calmly, my hand never leaving my firearm, I suggested to my wife that we check out the back alleyway where the home’s parking spaces were. She caught my drift quite immediately and we cleared the home without another word. The strange man followed us all the way into the alley so I politely excused my wife and I by telling him that we were going to walk down the alley to see what the area was like. As soon as we’d broken away from him I called the police and reported the incident…careful to mention to the dispatcher that I was carrying concealed but that I had NOT been forced to draw my weapon. Minutes later a police car came flying down the ally way and asked us where we had last seen the man.

Long story made slightly shorter…the strange man and his accomplice(s) had fled by the time police arrived to search the site. The officer told us that there had been multiple such reports in the area recently and that it appeared we had walked right into an attempted burglary. It was a new construction home and there have been many other instances of theft on new construction sites around Nashville.

Fortunately for my wife and I, our encounter didn’t result in violence, but not everyone in our position is so lucky.

This was the closest I’ve ever come to needing to use my firearm in self-defense and I just want to express, first-hand, how grateful I am for the freedom afforded to me by the state of Tennessee. It is a privilege that I am allowed to carry a firearm in defense of my family and myself and today we experienced the benefit of that privilege firsthand. I am extremely grateful to have not had to use my weapon (I value human life quite highly and I hope I never need to harm another person).

Please like and share to help show the world that guns can be used FOR good and BY good people.

Previous article: #DIGTHERIG - Mike and his Lionheart LH9NC Next article: VOTE NOW: The Best Holster In The History Of Ever, Version 2016