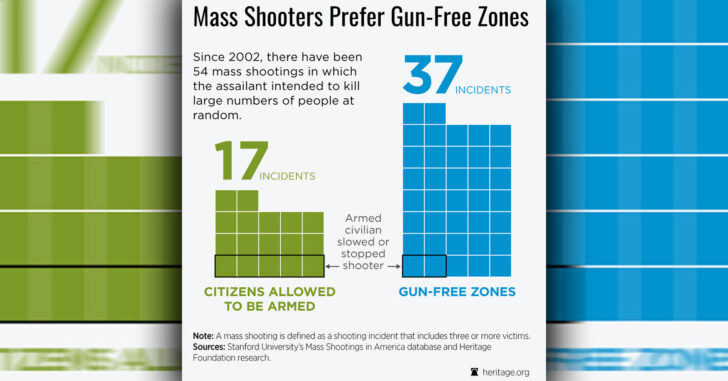 The gun control activists in the United States are fixated on the idea that “gun free zones” will stop crime. They have crusaded to include everything from government buildings to schools and churches under the “gun free zone” umbrella, barring legally armed citizens from setting foot on the property. The problem is that these laws have proven to have the exact opposite impact: instead of deterring armed individuals, these “Gun Free Zones” seem to attract mass shooters. By a 2:1 margin. A study by The Heritage Foundation outlined exactly how lopsided that ratio is in real life, and how it prevents people from putting up any form of a fight.

From the analysis by The Daily Signal:

The dataset includes 153 incidents going back to the beginning of 2002.

Research done at the Heritage Foundation found that fifty-four of the 153 incidents (35 percent) involved a shooter targeting people at random who were not relatives or adversaries of the attempted murderer.

Of the 17 shootings that occurred where citizens could legally carry firearms, 5 (29 percent) were ended when the gunman was stopped or slowed by a gun permit holder’s intervention.

Not only do mass shooters prefer gun free zones 2:1 over other places, but there’s a much lower probability of an armed citizen slowing or stopping the shooter (which makes sense). Is it time to accept that the concept of a “gun free zone” is flawed from the start, and is doing more harm than good?