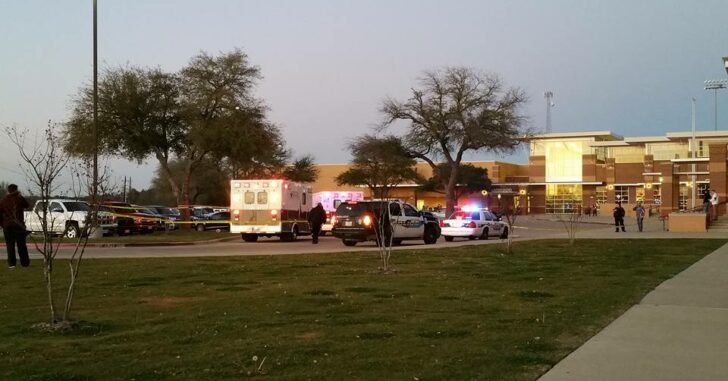 PALESTINE, TEXAS — A shooting occurred yesterday evening in a high school parking lot, but it didn’t have anything to do with any students, nor was it a school shooting. That is, unless you’re the media or Moms Demand Action.

The altercation occurred ‘during a basketball game’ and when you read the headlines, you would be led to believe that the shooting took place at the basketball game itself. Well, it didn’t. What happened was something that happens all over –a violence incident between previous lovers– except this particular story makes headlines because it happened to occur in a parking lot on school grounds, which in turn was immediately labeled a ‘school shooting’. Here are just a few headlines making the rounds: On February 26, 2016, at approximately 6:15 pm, Officers from the Palestine Police Department responded to the Palestine High School, located at 1600 S. Loop 256, in reference to several 911 calls of shots fired in the parking lot of the school.Upon arrival, officers learned that two adult males were involved in an altercation. The suspect reportedly displayed a handgun and fired several shots at a 63-year-old male victim, striking him at least once in the upper arm. The suspect then assaulted a 59-year-old female victim who was accompanying the male victim, striking her in the head area with the handgun, after the gun reportedly malfunctioned. It is believed that the suspect and female victim had a prior relationship.

During the disturbance, witnesses flagged down Chief Stacy Hillhouse of Malakof ISD Police Department, who was present as a school representative for a basketball game being held on campus. Chief Hillhouse was able to defuse the initial incident and the suspect was detained.

During the investigation, it was determined that several shots were fired in the parking lot, and additional rounds struck a passenger vehicle occupied with adults and children as they were driving in the lot. No one was injured in the vehicle.

The victim was transported to Palestine Regional Medical Center, with injuries that were initially reported as being non-life threatening. He was later transported to a Tyler Hospital for additional treatment.

Palestine Police Department patrol officers and members of the Anderson County Sheriff’s Department were able to secure the scene until members of the Detective Division could arrive to process any evidence related to the incident.

The 63-year-old suspect, of Teague, TX, was taken into custody at the scene of the incident and was later transported to the Anderson County Jail. He was charged with two counts of Aggravated Assault with a Deadly Weapon. Additional charges of Deadly Conduct are likely to follow.

The names of the victims are being withheld at this time. The suspect’s name will be released after he has been arraigned.

“It was very fortunate that there were not additional injuries or victims as a result of the incident, as Palestine High School was hosting regional playoff basketball games at their facility. Our officers responded in a very timely manner. They did a great job securing the scene as well as dealing with the suspect, amid all of the chaos.”

When the world hears the term ‘school shooting’ nowadays, they immediately picture a student or students wreaking havoc on other students and faculty. The term, however, is now used to entice clicks to articles and to get the gun control debate running around like a rabid animal, which doesn’t know what to make of anything anymore… given it’s rabid condition.

In reality, this incident is an unfortunate end due to a man who was angry at his ex-girlfriend, and should –in no way– be labeled a school shooting, simply because it was happening in a school parking lot.

The gun control group Moms Demand Action famously released a running list of school shootings (which doesn’t appear to be live as of this writing) since the horrific events at Sandy Hook Elementary. The number of ‘school shootings’ in their list is large, but that’s simply because the majority of them were not school shootings in the definition that we know. They just happened to take place on school property, some even during the night. Others, gang-related.

My point is this: It’s not fair to anyone when the media and others label an event like this a ‘school shooting’. The definition in the minds of the majority is something much different, and it’s not a term that should be thrown around with ease.

A school shooting is a form of massshooting involving a gun attack on an educational institution, such as a school or university. The U.S. Secret Service defines them as shootings where schools are “deliberately selected as the location for the attack”. (source)

There’s a big difference between a dispute between 60-year-olds in a parking lot and a mentally ill student looking to kill as many classmates as possible.