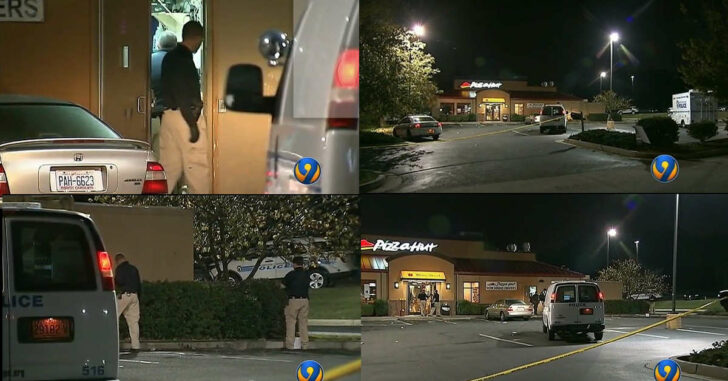 CHARLOTTE, NORTH CAROLINA — A Pizza Hut employee shot and killed an armed robber after three suspects stormed the location at closing time. The two other robbers reportedly fled after seeing their accomplice shot and killed.

During the News 9 investigation, employees operating in the neighborhood admitted that they had to routinely travel in packs to their personal vehicles at closing time.

“Sometimes we have to walk out in groups together just to be safe and to make sure everyone gets home safely,” one employee admitted to WSOC-TV News 9.

The employee who shot the robber used his own personal handgun.

Because the attempted armed robbery happened at closing time, 1:40 a.m., no customers were present. Both of the robbers who fled are currently being tracked by police.

The case will be referred up to Mecklenburg County District Attorney’s office to be reviewed for any potential charges against the employee but at this time he has not been charged with any wrongdoing.

A lot of Americans have to work in very rough neighborhoods because that’s where their business needs to operate. Wage employees don’t make enough to normally lose their lives over what’s in the register or safe, but that won’t stop armed robbers from trying to take it.

As that employee obviously valued his life, he had two basic choices: defend it or let it be taken by the first careless robber that didn’t think he was complying fast enough.

Victimhood should never be a career goal.

Thankfully, this guy was ready and acted in accordance with the law as to his right to defend his life when faced against a deadly threat. A gun was recovered from the slain armed robber but there’s absolutely no doubt that his two buddies will be back, in some version, to terrorize other businesses in that area.

After all, what’s yours is theirs, right?

Well, for law-abiding gun owners in Charlotte, it looks like there may be some resistance to that previous statement. Unfortunately, armed robbers are unlikely to get the memo any time soon.