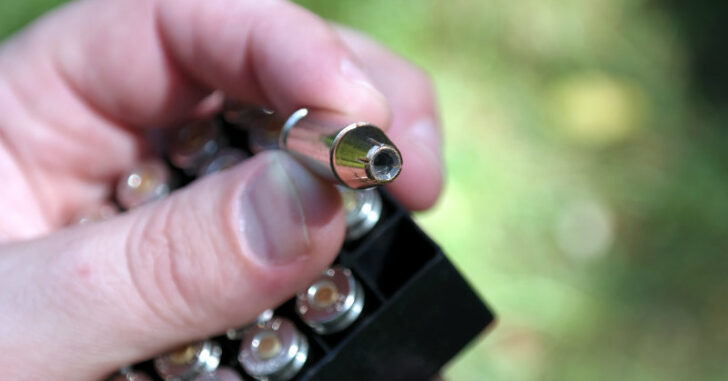 The year is 1972.  President Nixon is still in office, the Godfather was just released, and ammunition standards decided to take a dip for the worst.  Just one year prior, the Federal Reserve divorced from the Gold Standard and, to keep up with the times, ammunition and firearms producers must have also wanted to cheap out on their costs, too.

The Sporting Arms and Ammunition Manufacturing Institute (SAAMI) set the guidelines for a standard pressure in pistol and rifle munitions being produced, marketed and sold in the United States.  These standards were widely adopted and the old style of standard round was now known as the “+P” or “overpressurized”.

This is mostly because that would sell way better than selling the new standard as, “Now weaker than before!”

It was 1972 after all — hipsters and irony hadn’t been exported to America, yet.

Setting The Precedent For Overpressurized Ammunition

Anyhow, the SAAMI set a standard for pressurization of a round and even developed a standard proof round to ensure every gun going out to market could withstand a known amount of stress before going into the hands of a consumer.

The proof round is an extremely overpressurized round meant to bring the firearm near its capacity.  That pressure changes depending upon the size of the round and other factors.  Standard rounds are usually far below this pressure.  The reason is simple: you don’t want a gun blowing up in your hand.

Whereas before, people designed Magnum rounds built with longer cartridges to dissuade shooters from loading them from substandard .38 Spc revolvers, this new generation of munition standards would altogether eliminate the need for that.

Guns would be rated up to +P, designating that they’ve met the requirements to handle overpressurized munitions.  Not all guns would be rated to this standard.  And, if your gun isn’t, it’s not altogether useful for you to be firing those types of rounds.

Overpressurized ammunition generally gives the round more force.  A common marriage you’ll see is the +P with a jacketed hollow point.  That’s because a jacketed hollow point will lose a bit of force due to its aerodynamic quality versus a standard full metal jacket.  This will result in less penetration and even a slower velocity.  Overpressurizing the round can compensate for this loss and bring a JHP back up to FMJ velocity and penetration levels.

Just like we were talking before, the pressure variable for the round is determined by taking a lower percentage of the proof pressure.  The proof pressure is the highly suggested upper limit on what a gun can safely handle.  An overpressurized round is a small percentage of that proof.  If your gun is rated for +P, that means your gun is capable of handling that type of wear and tear.

If your gun isn’t rated for +P, it can probably still fire +P rounds — it just isn’t designed to handle that wear and tear.  Will it blow up in your hand?  More than likely not.  You may find your barrel, recoil rod, spring, and even striker degrade at a much faster rate.  Critical pieces may fail sooner in the pistol, ensuring it does not fire until repaired.  A leprechaun may jump out of the barrel and turn your first-born into a unicorn.  Leonardo DiCaprio loses his Oscar to Kanye West.  All sorts of weird things happen when you fire overpressurized ammunition from a pistol or revolver not rated for it.

And now we’ll introduce a further step: higher pressure (+P+) rounds.  That’s a round that’s taken to an even higher percentage of the proof pressure.  Let’s take the 9x19mm round as an example.

That’s nearly a 30% increase from the standard.

Most +P rated 9mm pistols are rated to withstand greater than 70,000 psi before catastrophically failing.  That said, that’s an approximate proof point — so failure is expected by both the manufacturer and the ammunition producer.

In conclusion, check your owner’s manual to see if your pistol is rated for +P munitions.  If it is, feel free to load up with some JHP+P or even JHP+P+ for self-defense purposes.  If not, your gun may still fire it but it is very not recommended by us, the company who made the ammunition, and the company that built your gun.