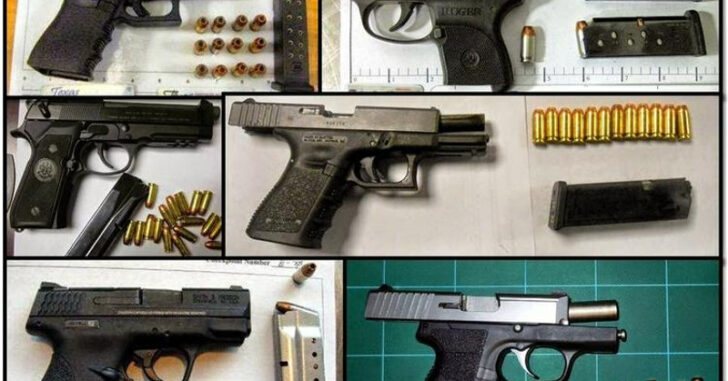 The Transportation Security Agency is a little confused as to why it’s recovering more firearms through its passenger screening process.  According to an LA Times article, the TSA reported a total of 2,632 firearms were confiscated in its passenger screening section — found usually in carry-on bags.  That’s a quick way to permanently lose a firearm.  More importantly, it’s not even necessary to try to “sneak” a gun through carry-on because you can easily and legally do it by just shipping it as luggage by declaring it in the baggage checking process.

“The transport of firearms by commercial air in carry-on bags represents a threat to the safety and security of air travelers,” TSA Administrator Peter V. Neffenger said. “Through increased training in detection methods, our officers are becoming more adept at intercepting these prohibited items.”

The TSA isn’t getting smarter — it looks like 2,653 people got dumber.  Apparently, this is a 20% increase from the number of firearms recovered by the TSA in 2014.  The vast majority of the captured firearms contained ammunition.  Amongst the leaders:

We’re still uncertain the logic behind those who tried to carry into the secure area of the airport.  Not only is it arguably illegal, it almost always results in the permanent loss of the firearm.  Think about gambling with a $400-$1200 firearm?  We don’t.  Especially when there’s a cost-effective way to ship it in baggage.

There was an article we covered awhile back involving a Florida man who was surprised to learn he had packed a fully loaded L. W. Seecamp .380 ACP in his carry-on bag.  He wasn’t charged but he definitely missed his flight and definitely had legal expenses surrounding that case.

Guns don’t go on carry-on.  Ever.  Not on trains, not on airplanes.  If you drive a car or truck, you’re governed by the state law you’re in.  When you’re on Amtrak, it’s checked baggage.  American Airlines?  Checked baggage.

The only exceptions are some metro lines — like MARTA (Atlanta) — will allow you to carry firearms on buses and metro lines so long as they are kept concealed and you’re properly licensed to carry.