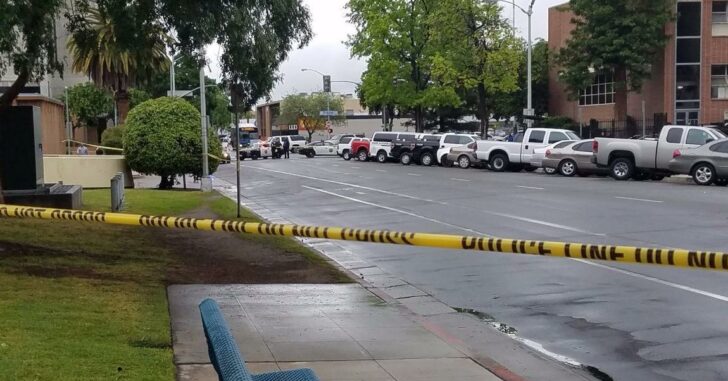 FRESNO, CALIFORNIA — Three people are dead after a man started walking down the street and shooting at people. The incident only stopped when the suspect was looking down the barrel of a police officer’s firearm.

From the LA Times:

In less than a minute, Dyer said, 16 shots were fired at the four different locations.

Moments later, a PG&E pickup truck arrived at police headquarters at Fresno and M streets to report his passenger had been shot by a gunman who approached them, he said. Dyer said the attack was unprovoked.

The gunman then walked westbound on East Mildreda Avenue from Van Ness, where he came across a resident. He then opened fire on the resident, the chief said. The resident was not struck by the gunfire.

The gunman continued walking on Mildreda and approached Fulton Street, where he encountered a man. The gunman fired several rounds at the man, killing him, Dyer said.

At this point, the chief said, the gunman unloaded his .357 revolver, dropped the shell casings and reloaded his gun.

He then headed toward Catholic Charities in the 100 block of North Fulton Street and opened fire on a man in the parking lot, striking and killing him, Dyer said.

An officer in the area spotted the gunman running south on Fulton. The gunman then “dove onto the ground” and taken into custody, the chief said.

“As he was taken into custody, he yelled out ‘Allahu Akbar,’” Dyer said.

At least three of the victims were white, Dyer said.

Dyer said Muhammad had expressed hatred toward white people and the government.

Dyer said he wasn’t clear if it was terror-related.

Let’s stop talking about terrorism and focus on concealed carry, because this incident was only stopped when the suspect was up against someone else with a gun. It’s funny how these criminals get cowardly when they’re faced with a person with equal force that can take them out.

Terrorism or not, we need more legally armed citizens and less crazy people. Since the latter doesn’t seem as realistic, it’s time to start letting the residents of California gain easier access to concealed carry.