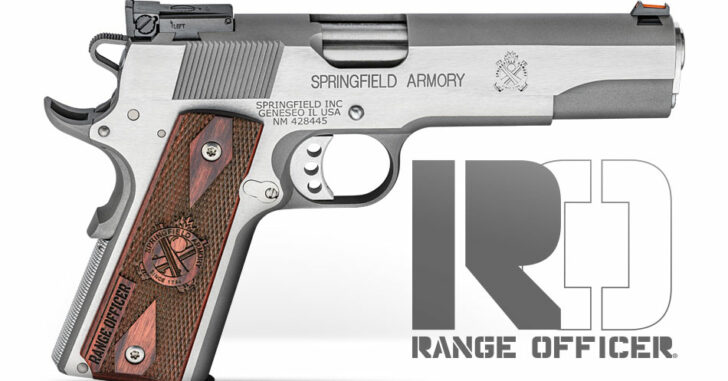 Ain’t she a beauty? Springfield’s Range Officer has received some upgrades with this new offering. Is this in your future?

The new Range Officer® Stainless models feature grips that are as durable as they are attractive. Cocobolo is well known as one of the hardest of woods that will stand up to heavy competition and recreational use. A double-diamond checkering pattern provides positive grip surface without abrasion while the traditional Springfield Armory® Cross Cannons proudly display the Range Officer’s® heritage.

The new Range Officer® Stainless models are built on full-size Government model frames. The forged stainless steel frame and slide add recoil-dampening weight to both 9mm and .45 ACP models. Both share the same exterior dimension of 8.6-inches long and 5.5-inches tall while the 9mm weighs in slightly heavier owing to extra barrel material.

“The stainless steel match barrel and bushing also make this model particularly ideal for those who are shooting in adverse weather climates,” explains Chad Dyer, Springfield Armory Marketing Director, “The frame is resistant to rusting in damp, or even wet environments. Not only does it look great, but it’ll also hold up to extreme shooting environments.”

Like the Parkerized predecessors, the new stainless models offer the features that made the original Range Officers® so popular. A fiber optic front sight provides great recreational or competitive visibility while the fully adjustable target rear sight allows the shooter to customize exact point of impact to their preference and preferred ammunition. A five to six-pound match grade trigger provides the crisp release necessary to wring maximum accuracy from those precise sights.

Following the original Range Officer® design, the profile is clean and uncluttered with the safety and magazine release on the left side only. Less clutter also means less weight, so competitive shooters can hold the Range Officer® steady on target with less strain.

With the new 2016 arrivals, the Range Officer® Full Size family now numbers six, with two each chambered in 9mm and .45 ACP. The 9mm models come with two nine-round magazines for a total capacity of 10+1. The .45 ACP includes two seven-round magazines.

“The First Name in American Firearms,” Springfield Armory® was founded in 1777, when George Washington ordered the creation of an armory to store ammunition and gun carriages during the American Revolution. In 1794, the armory began to manufacture muskets and spent the next 150 years supplying firearms for every major American conflict. The original armory closed in 1968. In 1974, the Reese family took ownership of the Springfield Armory® name and began making the M1A™ rifle. Today, Springfield Armory® develops many products loyal to the company’s heritage, like the 1911 pistol, while ensuring its future with innovative products, including the XD®, XD® Mod.2™ XD(M)® and XD-S® polymer pistols.