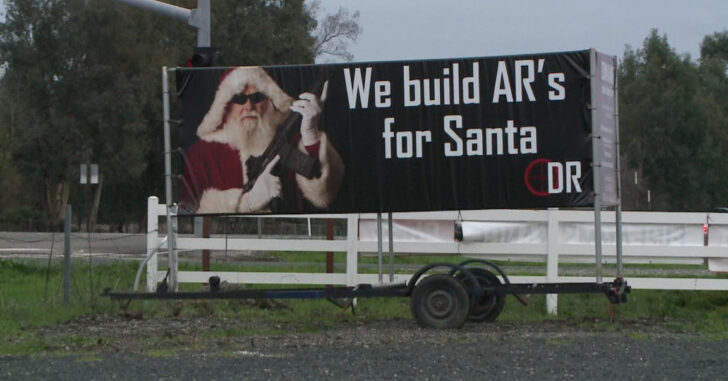 Here is something you don’t see everyday: a billboard featuring Santa Claus armed with an AR-15 rifle and saying, “We build AR’s for Santa.”

You can find this eye-catching advertisement for Down Range Indoor Training Center on Highway 99 in California. As you can probably imagine, not everyone who drives this route and sees the billboard is a supporter of guns. And mixing guns with Christmas and Santa Claus is sure to cause some disputes.

Steve Dyke, one of the founders of the California based Down Range Indoor Training Center, says that his advertisement should not be taken down.

“Well, you know, some people get toys and stuff like that for Christmas. Other people, when I was growing up, I got guns from Santa Claus. I mean it’s just a matter of where you’re from,” said Dyke in a statement to media sources this week. “Some people get firearms. So and when Santa needs help putting together an AR rifle, we can definitely help him out with that.”

Dyke believes that the ad is supposed to be humorous and thought that it would be a great way to encourage people to visit the training center. He certainly didn’t believe it would be too violent of an image, but others beg to differ. Residents have been coming forward saying that they think the billboard is, in fact, too violent and that children will get bad ideas about guns.

Will Clark is the co-founder of the business. He adds,

“Santa has got his eye protection on, his finger of the trigger, the guns pointed in a safe direction. We also have archery. So we almost should have had Mrs. Claus on there with some bows and arrows talking about how she can shoot targets as well.”

Where has this country gone? Must everything be an issue? There once was a time where kids would wake up on Christmas morning to a new 22 rifle or similar firearm. It wasn’t a problem then, yet it seems to be an enormous issue now.

Previous article: [CCW IN ACTION] Armed Teen In Ohio Loses His Life After Trying To Steal An Armed Citizen's Shoes Next article: Another Teen Shot And Killed By Police In St Louis, Police Release Video, Protests Have Started, But Why?