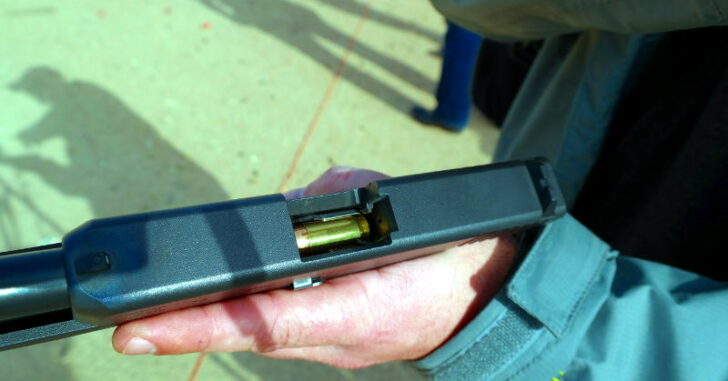 We’ve all seen the classic Mythbusters episode where Jamie attempts to attack Adam with a knife to demonstrate the distance at which a knife can be lethal.  Ultimately, the experiment proved that even at longer-than-expected distances (20 feet), an attacker has the opportunity to deliver a critical blow to a defending gunman.

If you haven’t seen that brief experiment, we’ve included it for your viewing and educational pleasure.

The truth is — the distance in that experiment is mostly irrelevant in the real world.  People can pose a risk at closer or farther distances.  The important part, as a concealed carrier, is being able to identify the risk and mitigate it before it becomes an outright conflict.

This is a hard step.  It requires you to maintain situational awareness of your surroundings.  You need to be paying attention because you can’t stop what you can’t see.

Step 2: Maintain Distance From Threat Or Ideally Move Away

Sometimes you’re in cramped quarters and movement away from the threat just isn’t an immediate possibility.  For instance, on a bus or a train, it’s hard to maintain distance between yourself and a potential attacker.  Where you can, get up and move back a few seats.  Try to keep your line of sight on the potential attacker without entering into a staring contest.

At the first available moment:

In states where you have “Stand Your Ground”, you are under no obligation to retreat from a threat.  That’s well and good but in a busy situation involving multiple people milling about, if you can end it without an exchange of gunfire — all’s the better.  Every bullet out that chamber will have a policeman’s tag hanging off of it when the day is through.  If leaving is an option, take it.

Step 4: Advise Your Opponent To Stay Back

Polite and direct will do it.  You don’t have to be in the business of selling that poor chap shoes, you just need to let him or them know that you’re advising them to keep their distance.  Say it loud.  Don’t worry about people with their faces buried in cell phones looking up at you.  You stay focused on being safe, keeping as much distance as you can, and having your potential adversaries on lock.

Step 5: When All Else Fails, Engage Judiciously

It’s the sad truth that not everyone is open to hints or suggestions.  At this point in generally any encounter, most people would probably pick up on the fact that you don’t want them near you.  For those in the nearby area, if they’re not buried in their cell phone, they’ve likely picked up on the fact that there’s a potential altercation about to go down and will either move away or muddle the situation further.

The vast majority of all potential conflicts will end well before Step 5 is ever in play.  The rare exceptions usually include people either too drunk to know what’s best for them or people with actual bad intent in mind.  Neither are your problem if they decide to close distance with you.

Do what you can, at every single stage, to protect yourself, avoid the conflict, and escape.  You’re not there to administer justice or be a hero — you’re there to live.  And if a person or persons decide that you’re going to be an easy lunch, that’s their problem.

By the time you remove your gun from its holster, your enemy is fully aware you are armed.  If your opponent surrenders, turns and runs, or faints (it’s happened) before that gun fires, you have a duty to not shoot.  If your enemy sees it as “game on”, well, aim judiciously and aim center mass.

When police arrive, comply with all commands and contact an attorney as soon as possible.  Identify yourself early on and do not make any sudden movements.

As you can see from the above mentioned steps — there are a lot of factors between detecting a threat and responding to it with deadly force. There will be delays between steps.  There will be skipped steps because life isn’t perfect.  The important thing to remember is that pulling the trigger should be the very last thing you do after you’ve exhausted the other options.

Previous article: Here Is Why Rice University In Texas Will Remain A 'Gun Free Zone' Next article: Sheriff Of County In NY: If You Have Your License, PLEASE Carry Your Gun