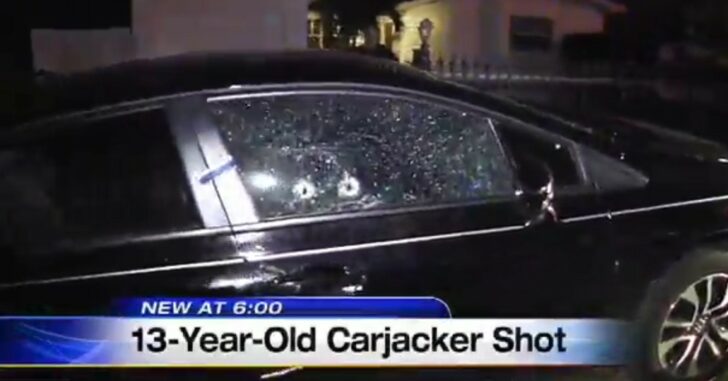 NORTH MIAMI BEACH, FLORIDA — A 13-year-old is in the hospital with two gunshot wounds after himself and three others allegedly approached a vehicle at an intersection, armed, and tried to carjack the two people inside. That’s when the passenger pulled out his own gun and fired in self-defense.

It happened early Tuesday morning when 28-year-old Yazmina Mora and her passenger, 25-year-old Paul Clarke, were stopped at a red light. Mora asked Clarke what the four people coming up to her car were doing, to which he replied, “I don’t know.”

According to the report, the teen began to approach the car with his hands to his chest. Clarke said he spotted what he believed was a black revolver in the teen’s hands, so he grabbed his own gun from his right front pocket and fired two shots out the window.

After Clarke fired the two shots, Mora told police that she hit the gas to get away from the other suspects, leaving the injured 13-year-old lying in the street. Once out of harm’s way, they called police and then made a U-turn back towards the scene and waited for police.

“He was afraid for his life and was protecting himself and his girlfriend,” Detective Cora Mann said.

The young teen was airlifted to the hospital and was shot once in the upper right abdomen. He underwent surgery and is expected to survive.

It was later found out that the teen had been reported missing by his parents just days before the incident. Now they know where he is, and hopefully this event was a wake-up call to the young man who is lucky to be alive.

The teen is expected to be charged with attempted carjacking. The three accomplices took off on foot, and police are trying to determine who they are.

Neither of the intended victims were injured.