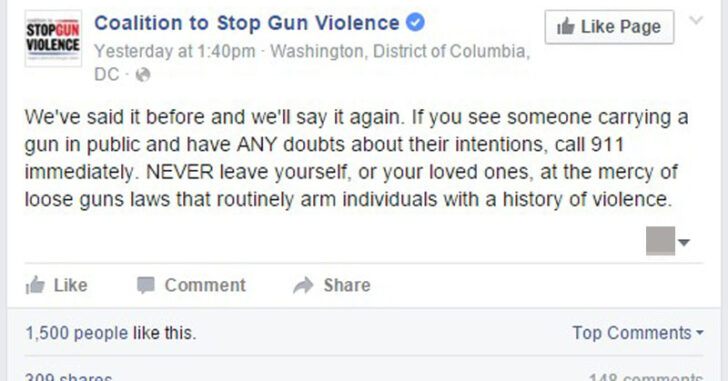 In a world of paranoia, no one is safe. The gun control group Coalition to Stop Gun Violence likes to take things to the next level, as they have done so in the past before.

Their plead to members, as seen in the screen shot above that was taken of this post: Call 911 immediately if you see anyone carrying a firearm, BECAUSE DANGER!!

Looking through the thread, you’ll see comments from both sides. Some of them, however, do a wonderful job at contradicting themselves. Take Jeff Brederhorn’s comment as an example. Jeff feels it necessary to call 911 on an armed citizen because he doesn’t know if they’re a good guy or a bad guy, but then he offers up the following suggestion as an alternative (also highlighted in red in below screenshot):

I have a better idea. Why not require gun training (e.g, like we do with cars) before you can legally own a gun? At least that way when I see them I can rest assured that they at least are trained to handle a gun. But alas, this idea is immediately “shot down” when mentioned. (pun intended).

My question is; how would Jeff know that a person has had training by simply looking at them? And how would this help him distinguish a good guy from a bad guy? He’d still see a gun, and he’d still be required –in his mind– to call 911 because he is in fear for his life. With their BSC ideology, it’s only a matter of time before they get someone injured or killed by using this reckless tactic.

Think for a moment about how the call would go, and then realize that the responding officers will be responding with the knowledge that someone is armed –and nothing more. It’s a recipe for disaster and while most police officers will understand what is going on shortly after they arrive, we live in a different world where everyone is on heightened alert for numerous reasons.

There is no need to spread more fear with such a ridiculous and dangerous campaign.

Plus, this has to be some sort of abuse of the 911 system.

Previous article: #DIGTHERIG - Anthony and his S&W M&P Shield 9mm Next article: [REVIEW] Bigfoot Gun Belts -- Tougher Than The Sum Of Its Steel