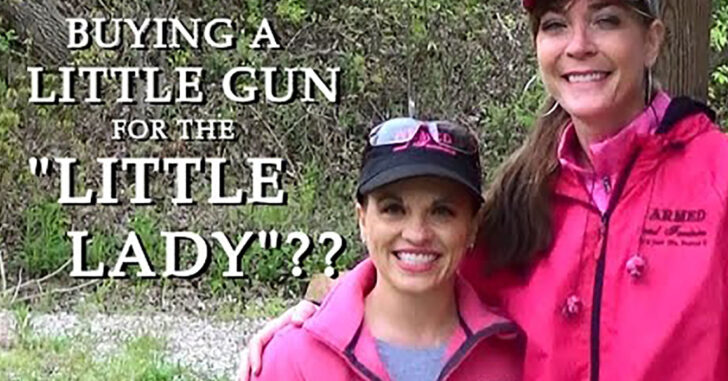 As someone who runs a YouTube gun channel, I have certainly subscribed to quite a few really good channels myself that are out there on the subject. I also look at what is out there on different topics, and one thing that I find that makes me cringe is seeing people who make videos touting the “perfect gun for a woman.” What does that even mean? Are there videos out there addressing the “perfect gun for a man?” If there are, I’ve never seen any. Guys, while we do sincerely appreciate the chivalry, we aren’t fragile China dolls.

What this actually says to me is that these are videos for women who are being handed a gun by their husband or boyfriend, because it’s something you can use without any training. Ladies, quite frankly, this advice is crap and just plain dangerous. Giving anyone a gun that they don’t operate with any level of proficiency is asking for trouble.Telling you you aren’t capable of learning to use a more suitable gun is just condescending. And really, the idea that you can’t run a decent sized semi-auto pistol is simply not true.

Micro sized guns like the Body Guard .380 or the Remington RM .380 are two such guns that are often recommended to women because they are very small and concealable and therefore they won’t be hard for the ‘little lady’ to control. Really? Let’s be honest for a moment. They are guns with a specific purpose, but that purpose does not necessarily translate to “lady gun.” They generally have long double-action triggers which makes them very difficult to keep on target, without extensive practice and decent hand strength. That translates into a lot of missed shots and potential hits on unintended targets. Because they’re so small, they’re harder to control. They designed as close-quarter point-and-shoot guns, and they work great in this capacity, but guys, would YOU carry one as your primary gun? I know I wouldn’t. So why should your wife, girlfriend or mom?

The other gun that is most often prescribed to women new to shooting is the .38 snubbie. The reason being that it’s simple to operate and since women aren’t capable of racking semi-autos, it’s the perfect choice, right? WRONG! My friend, Krista, who appears in my latest video, is proof positive. She’s new to shooting. She stands at only 4’10”, yet she handles a full-size 1911, double-stack Glocks, M&P’s, Rugers and XD’s with the same ease as anyone I’ve ever seen. A .38 snubbie is a good gun, and it could be a legitimate choice for a carry gun for many people, but don’t choose it simply because you think it’s “a woman’s gun”. While it’s simple to operate, it’s not necessarily easy to shoot in double action.. It can also be rather painful to practice with after 20 or 30 rounds.

Look, if you’re going to own a gun, then you owe it to yourself and to those around you to become proficient at operating it, regardless of the model you choose. That takes practice. You wouldn’t feel particularly comfortable behind the wheel of a car on the Beltway in DC if you only drive your car once a year. The same thing applies to a firearm. You have to get to know your gun. Know more than simply how it operates. Get to know how to operate it without having to think about it. Once you’ve done this, you may soon realize that the “little lady gun” may not have been a very good choice afterall. Believe me, you CAN operate any handgun a man can operate. I’ve witnessed this revelation hundreds of times. It’s all about technique and practice.

If you are buying a firearm, then take the time to do some research on your own so that you can make an informed decision on your own. Seek out a course where different firearms are available so that you can see what you like. Don’t let others tell you what you should get simply because you’re a woman. Krista proves that the “little lady” can handle the same guns as the guys, and so can you.