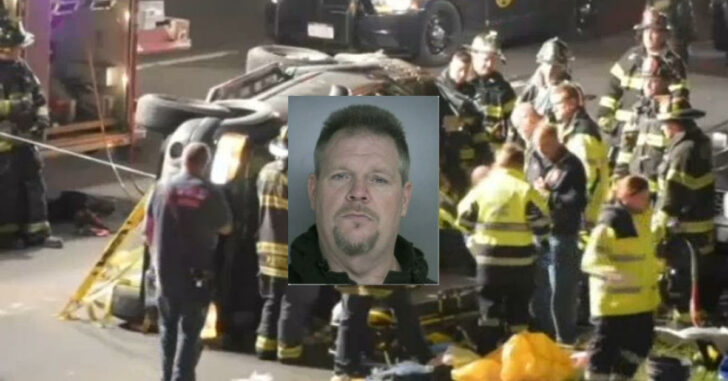 LONG ISLAND, NEW YORK — The driver of one of the vehicles involved in a grizzly crash fled the scene and was pursued by an off-duty police officer on foot. The officer followed the man and told him he was an officer and to stop. The man then allegedly pulled a knife and approached the off-duty officer, who then opened fire. He missed and the driver escaped.

According to New York NBC 4, the driver has been identified as 40-year-old Sean Burke. He is charged with menacing a police officer and drug charges. Leaving the scene of an accident should have been one of the charges but we’re sure the District Attorney will get to that later. In the meantime, let’s stick with the details.

If this had been a concealed carrier who had just witnessed a very violent accident in which one of the vehicles was turned nearly upside down, it would have been a very bad idea to pursue a suspect fleeing from the scene on foot. First off, the vehicle has identification on it which can help pin down the driver and the second, the driver now faces charges of leaving the scene of an accident.

Granted, we don’t live in a perfect world. And as for the officer missing his shot, it’s not a surprise. The incident occurred at night time and, as many of us know, finding proper sight alignment in the darkness is very difficult. When faced with a person approaching you with a knife drawn, the reality of the threat is already present. Making sure that shot hits is one of those real world problems that cannot be solved for.

This is one of the few incidents where, honestly, sight optics likely would have helped a lot. Using a sight optic — like what’s found on a Glock MOS — can make sight alignment much easier in darkened conditions. Night sights, such as Trijicon and similar, can also be a boon. We’re not going to bust this officer’s proverbial balls over missing a shot because in real world situations, good guys sometimes miss. What we will say is that if that suspect hadn’t decided to flee immediately thereafter, that police officer could have been gravely hurt. That’s unacceptable.

The suspect seems to have been in possession of some form of illegal drugs and his actions may have lead to the serious injury of the driver of the other vehicle. Criminals don’t care. Their first priority is themselves. And this guy obviously didn’t think it through because he ran even though the vehicle was quickly identified as belonging to him.

But in addition to endangering the life of the driver of the other vehicle and other motorists, he also endangered the life of an off-duty police officer. As concealed carriers, we have to be careful to not insert ourselves into similar situations. Be careful out there.

Rendering assistance to injured parties is a sign of a good human being. Putting yourself at unnecessary risk by pursuing a bad guy on foot is not. It could be very foolish. Be safe out there and carry concealed every day.