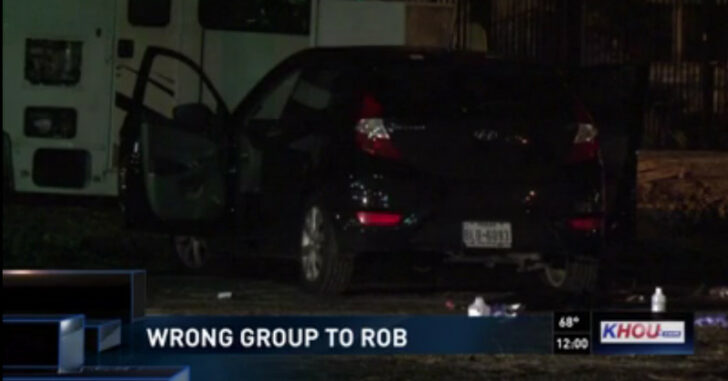 HOUSTON, TEXAS — Three robbery suspects, two of which were believed armed, suffered a terrible surprise when they attempted to ambush two men and two women exiting a bar at 2 am.  According to statements released by the victims and Houston Police through KHOU, two armed robbers approached the group as they were getting into their car.  The first one told the driver to give him his money.  But the driver held up his photo ID and credit card because he reportedly “doesn’t carry cash”.

The first armed robber slapped his belongings out of his hand.  That’s when the victim’s brother got out of the car and judiciously placed two well placed shots into the man’s chest.  He then immediately transitioned to the second armed robber and reportedly “emptied his 12-round clip (sic)”.

That second robber managed to flee the scene after allegedly stealing a gun out of one of the women’s purses.  He showed up to the hospital with seven bullet wounds.  The first suspect went down and was placed into critical condition.

“As soon as he shot him [the first armed robber], I ran over there and kicked him in his face twice because I don’t know if he was dead or not,” said the victim. “Kicked him twice in his face, tried to clear his gun, but it turned out to be a fake. It wasn’t even real.”

The investigator from Houston’s police department backed up the man’s assertations.

“It was found to be an Airsoft gun,” said Jeremy Spurlock, an investigator with the Houston Police Department. “There was no orange tip or anything. If you’d have seen it, you would have believed it was a real gun.”

When asked about the encounter, both brothers appear to be completely unphased by the situation.  They credit their background in the military as part of their mindset in getting through the situation as well as they did.

“It wasn’t scary,” said the victim. “We’re prior service military, so this was just like a regular reaction to us.”

Well, good enough.  The Harris County prosecutor will give the final word on whether any charges are pending but the Houston police don’t seem to think anything was too out of place.  What’s more amazing is that both attempted-robbers survived.  One was shot SEVEN times and still managed to escape?!  The first one got shot twice in the chest and survived in surgery.

Is this a weird new thing where medical science can save anyone?  I don’t know whether to be impressed or disappointed.  At least the concealed carriers neutralized the threat — that’s what matters.