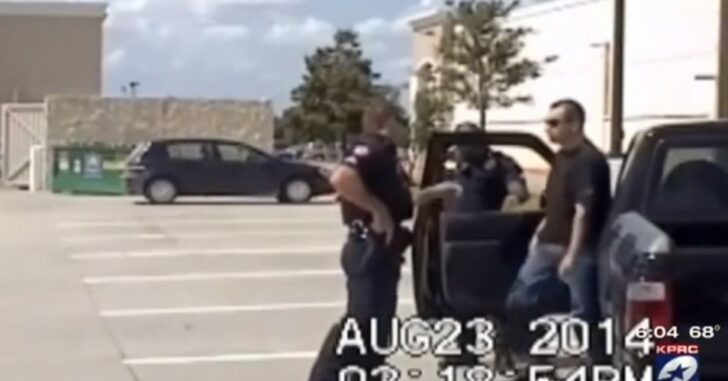 ROSENBERG, Texas — Alonza Gonzalez was pulled over for some minor traffic violations a few months ago when things turned sour after he informed the officer that he had his CHL and was carrying his firearm at the time.

The exchange and resulting arrest were both caught on police dash cam, and it’s making many question why the officers acted in the way they did.

In the video above, you can hear Rosenberg Police Officer Schnacky say, “You got your drivers license with you and insurance?” Gonzalez responded, “Yeah, what’s the reason you stopped me?”

Schnacky then said, “I’ll tell you in just a minute. You have your handgun with you today? Where is it?” Gonzalez replied, “On me, on my right side.”

At that point, Schnacky is seen walking back to his police car and calling for backup. But what for? Because Gonzalez was legally carrying his firearm?

When backup arrived, you can clearly see an officer with his firearm in-hand while Schnacky is having Gonzalez step out of the vehicle with his hands in the air. Then, he is handcuffed and placed under arrest for his two traffic violations.

In the state of Texas, a CHL holder has a legal responsibility to inform an officer that he is carrying a firearm when asked for identification. And that’s exactly what Gonzalez did.

Upon an internal investigation, the officers were found to have followed proper procedures.

Gonzalez feels that had he not had his firearm on him, the traffic stop would have went much differently.

“If I didn’t have my firearm on me, I would have had a citation and they would have let me go”, said Gonzalez.

And with that, I open the floor up to you. How do you feel the officers handled this situation?

Previous article: Paris Tragedy: Why You Should Carry A Gun Now More Than Ever Before Next article: 3 Questions Every Concealed Carry Vehicle Passenger Needs To Ask Themselves