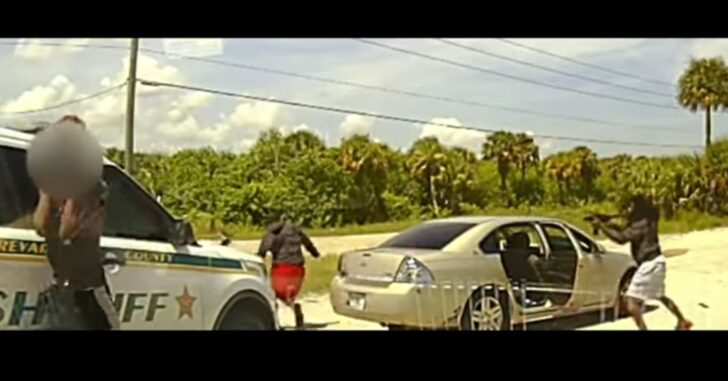 BREVARD COUNTY, FLORIDA — A terrifying video was released by the Brevard County Sheriff’s Office that shows their officers fighting for their lives against a man with an AR-15, who was sitting inside a vehicle that they had just pulled over.

At the start of the video, the officers can be heard chatting lightheartedly with the three occupants, but one occupant was still inside the vehicle and apparently was hesitant to come out.

Brevard County Sheriff’s Deputies Brian Potters and Tyler Thoman were targeted by gunman Paris Wilder, 38, during the stop in West Melbourne on Aug. 30.

The gunman ended up being shot dead as deputies returned fire, while deputy Potters suffered gunshot wounds to his leg and buttocks.

When the door finally opened, the man jumped out with an AR-15 rifle and began shooting.

What happened next was nothing short of chaos and violence, when the suspect was able to sneak up on officers from the other side of the vehicle. It would seem that at this point, luckily, either his firearm jammed or he was out of bullets, because he started to use the rifle as a hitting tool.

Shortly after the frame above, the officer being attacked is taken to the ground and the violence continues. The other officer leaves frame and comes back around from right to left, coming up behind the suspect and shooting him multiple times.

A 2-year-old child and a dog were also in the car at the time of the incident.

The injured officer, along with being shot twice, also suffered severe injuries to his head and face.

These officers acted quickly and bravely, and I’m thankful that neither one was killed during this ambush. Officers across the Country are put in these situations as a part of their job, and knowing that, they still show up for work every day to better their communities.

Previous article: 1 Killed, 1 Injured During Shooting On Haunted Hayride In Pittsburgh Next article: *UPDATED* Negligence Comes Even Within Our Industry: How Many Things Can You Find Wrong With This Sootch00 Photo?