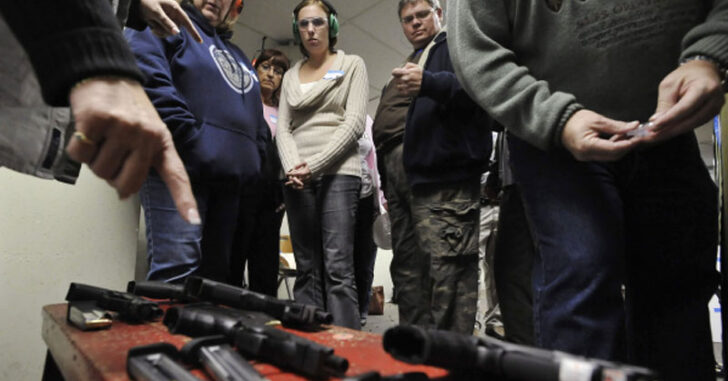 I oppose mandatory firearms training. It violates our Second Amendment protection against government infringement on the right to keep and bear arms. That said, I’ve been impressed with the instruction rammed down my metaphorical throat. Tedious yes, but comprehensive; instructors cover everything from how a gun works to the legal use of deadly force to anger management and firearms retention (added in Texas for licensed open carry). Plus live fire! But the classes don’t cover everything. Here are three things they don’t teach you in a concealed carry class . . .

Carrying a Gun Makes You Paranoid – At Least at First

The first time you strap on a concealed firearm, it feels like you’re carrying a Howitzer. Like you’re wearing a T-shirt that says “I’VE GOT A GUN!” Even in states with a gun-friendly culture (e.g., Arizona), first-time concealed carriers worry that a stranger is going to see their gun and confront them.

Pistol-packing paranoia makes perfect sense. Public speaking is Americans’ greatest fear; we’re hard-wired to be afraid of public embarrassment. (Loss of social status is a thing.) Being “outed” while carrying a gun – especially by someone who’s rabidly anti-gun and/or terrified of guns – is public speaking on steroids. “Oh my God. He’s got a gun! What do you need that for?”

Even if you live in a gun friendly culture, this fear isn’t completely unrealistic. No matter how much you mentally rehearse a reply to gun shamers or prepare for a police response (the police!), the prospect of “armed confrontation” still creates low-level paranoia (and constant checking of cover garments). It’s not comfortable.

Exposure therapy is the only “cure” for this paranoia. More precisely, lack of exposure therapy. The more you carry a concealed firearm without being “outed,” the less paranoia or anxiety you feel. It’s simply something you have to go through; a condition that lasts between a week and a month. The trick: go through it. If you find excuses not to carry daily, the paranoia will never disappear entirely. Or you might eventually abandon the whole idea of concealed carry.

Carrying a gun changes your personality – for the better

Gun control advocates have this strange idea: they believe that carrying a gun makes a person into amucho macho trigger-happy Clint Eastwood wanna-be.

This confrontation avoidance thought process becomes second nature. You become far less likely – if not completely unlikely – to engage in road rage or any sort of argy-bargy with a stranger. Sure there are concealed carriers with anger issues – which don’t disappear when they receive the state’s blessing to bear arms. But that’s not you, a person who took the time to read an article entitled Three Things They Don’t Teach You In Your Concealed Carry Class.

Another psychological aspect instructors don’t mention: concealed carry makes you more independent. By assuming direct responsibility for your own safety, the safety of your loved ones, and the safety of other innocent life (optional), you lose your inherent perhaps subconscious dependency on the state’s protection. You realize that you are a sovereign citizen.

Don’t get me wrong: firearms instructors talk (and talk and talk) about the enormous responsibility of carrying a deadly weapon. Fair enough. What they don’t tell you is how good, how right that feels. How it makes you a better person.

Carrying a gun is addictive

The only way to tell if you’re addicted to something: remove it and see if you suffer withdrawal. At the risk of giving the antis [additional] ammo to deride Americans exercising their gun rights, I’m going to say it. Concealed carry is addictive.

Anyone who carries a gun on an everyday basis can tell you about those times when they suddenly realize they’re not carrying one. Like when they disarm to go into Whole Foods, forget to rearm and enter a non-gun-free zone. Crap! I don’t have my gun! They’re plagued by the niggling (at best) thought “what if this is the one time I need it?” Which, by the way, can happen.

The paranoia/anxiety of having a gun eventually becomes the paranoia/anxiety of not having a gun. Traveling to states that don’t recognize your concealed carry license/permit can be an ordeal for a habituated concealed carrier. There are gun owners who won’t go anywhere where their gun isn’t welcome: local businesses, entire states and foreign countries.

I’m sure those of you who carry have other examples of what you didn’t learn in concealed carry class. Please share them below.