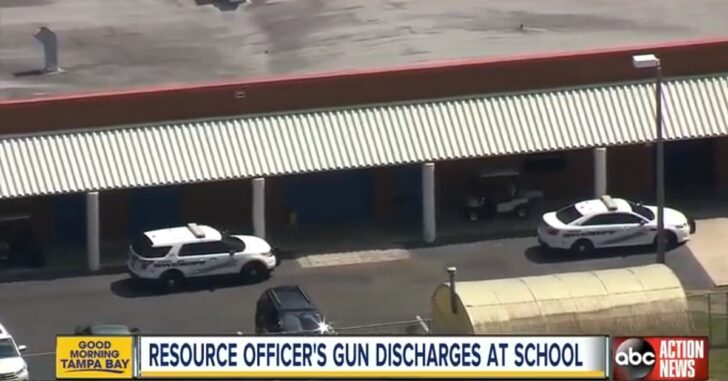 WESLEY CHAPEL, FL — A school resource officer, currently unnamed as an investigation is thoroughly underway, has fallen under intense scrutiny after his firearm discharged in the middle of a school cafeteria, very close to children, WFTS reports.

The officer seems to be just as surprised as anyone else that it took place. The firearm had a hot chamber, but it was holstered.

Deputies say the SRO was in the cafeteria, leaning against the wall when his holstered, duty-issued firearm accidentally discharged into the wall behind him.

The gun fired directly into the wall, and no students were in danger, according to the Sheriff’s Office. There were no injuries to any students, the staff or the School Resource Officer.

“It is a Sig Sauer 9mm,” Lt. Troy Fergueson said. “The weapons are not carried with a safety mechanism, per se, they are carried ready to use. Weapons are fully loaded armed and round is chambered in case of an emergent situation.”

Fergueson said the SRO was feet away from students in the lunch line.

“He would’ve had students passing in front of him, a few feet to the front, five or six feet down to the right,” he said… The incident remains under investigation. The SRO was placed on paid administrative leave. Investigators said they are not releasing his name until the investigation is complete. The SRO has been at the school for several years.

They aren’t certain about exactly what happened to cause the firearm to discharge, but we’ll be keeping an eye on the story to see what their conclusion is.

Whatever holster he was using, or however he was carrying, was directly responsible for the threatening of the lives of children.