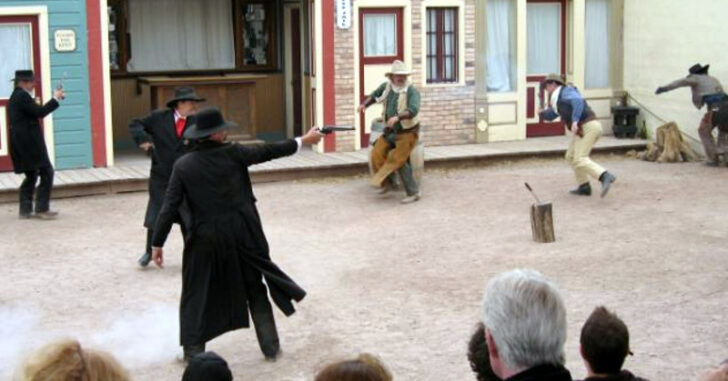 TOMBSTONE, ARIZONA — If you’ve ever seen Tombstone (1993), you’re probably a fan of the loosely-based historic gunfight which occurred in OK Corral between Wyatt Earp, Doc Holliday, and a bunch of rowdy vaqueros.  Well, a group of onlookers were in for a bad taste of reality when one of the actors showed up with a loaded six-shooter.  According to CBS News, one of the actors in the Tombstone Vigilantes re-enactment group arrived late to set and engaged in the fight with live rounds.  One actor was shot in the upper groin and a female bystander was also hit in the ensuing barrage.  The actor was transported immediately to a nearby hospital in Tucson where he underwent life-saving surgery.  The woman suffered shrapnel damage related to a round landing nearby and refused treatment.

According to police, the actor arrived late to set and did not properly inspect his firearm before discharging it.  Future re-enactments have been put on hold pending the investigation.  The Cochise Sheriff’s Officer allegedly found one live round in the chamber and five shells, indicating that five live rounds may have been used.

“Tombstone takes pride in the safety and security of its townspeople and tourists alike and the citizens of Tombstone can be assured that stringent safety protocol will be enforced prior to allowing any further gunfight skits,” the Marshal’s Office said in a statement.

It is extremely uncommon for live rounds to make it onto a film or re-enactment set.  Why?  Because there are stringent inspection policies in place for theater when real firearms are used.

Real firearms tend to bring an authenticity to staged conflict.  Every single day in theaters and film sets across the country, live firearms are used without a problem.  This is because, at the very least, each firearm is visually inspected before the actor goes into a scene — taking out the chance of negligent discharge.

This re-enactment group obviously did not observe those rules — choosing to ignore the first fundamental rule of firearm safety and paying dearly for it.

First rule of firearms: treat every firearm as if it is loaded.

There is never an exception to this rule.

Why, all of the sudden, did these re-enactors feel they were exempt?  That’s the better question.  It’s events like today that make any responsible gunowner cringe.  As it turns out — they weren’t exempt.  And thankfully, only one person was seriously injured.

If the actor arrives late to set, that is still no excuse to forego safety checks.  A simple check would have resolved that his firearm was loaded with live ammunition and that could have been rectified.

For those unfamiliar, gun rules in theater changed drastically in the past twenty years.  Whereas in prior times, people just depended on one another to check the firearms prior to them going out — the Crow (1993) proved to be the turning point in safety protocol on stage.

In that film, Brandon Lee was fatally shot in a scene involving multiple firearms.  It proved to be a wake-up call for the industry and future films dictated that someone on set needed to be personally accountable for the firearms used by the actors at all times.

This translates into having a firearms safety officer who, prior to issuing firearms used in a scene, will inspect the firearm with the actor to confirm that it is indeed either a.) unloaded or b.) loaded with the proper ammunition.

In theater, the only proper ammunition is a blank — a percussion cap with no munition.  And there is also a standing policy of never aiming a live firearm directly at another actor.  In close range scenes, it is acceptable practice to aim at an angle that would not result in a direct hit.  The reason for this is mostly for the comfort of the actor about to be shot.  Because the shooter and the stage manager or FSO has likely inspected the firearm — but the actor being shot may not have the opportunity to do so.

So, as you can see, there are plenty of fail-safes in place to ensure the safety of all actors on a live re-enactment or theater set.  We’re left wondering what in the hell this re-enactor was thinking and surely hope that the group is able to implement the correct safety protocols in the future.