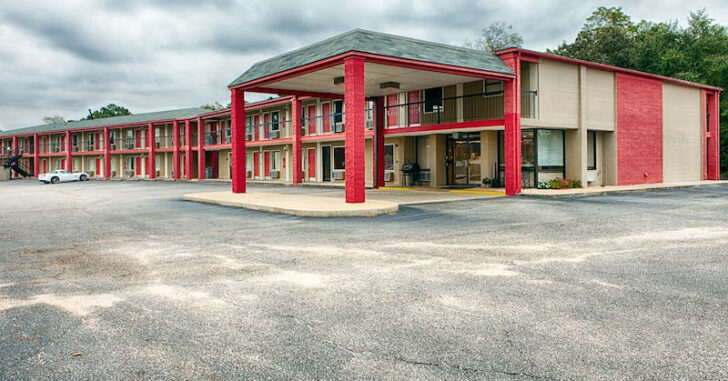 DALEVILLE, ALABAMA — A maintenance worker at the EconoLodge in Daleville has been arrested on second degree theft of a firearm after entering a guest’s room and stealing that guest’s firearm.  According to the report released through Dothan First, a fellow employee of the EconoLodge saw Solomon Henderson enter another guest’s room and leave around the time of the reported theft.

Solomon Henderson was a maintenance worker with key access to every room in the motel, said sources at the Daleville police department.  It didn’t take the guest long to realize his firearm was missing and he did the right thing — reported it missing to local police.  When police arrived, they found Henderson itching to get away.

“When the victim called the police, Mr. Henderson attempted to leave. Officers arrived, asked Henderson to stand by, and at that point, he says he ‘quit’ and tried to get away from officers,” said Sergeant Noah Suiter with the Daleville Department of Public Safety.

Sergeant Suiter (DDPS) also confirmed that Henderson had a prior criminal record, which means he may not have been able to obtain a firearm legally in the first place.  His position at EconoLodge granted him unique and special access to rooms that other hotel employees likely would not have had.  The manager’s rationale for allowing Henderson that access appears innocent enough.

“At the time, you know, we tried to give someone another chance, a second chance, because he had been out so long, but was not aware that the crime was theft by taken,” said Willie Hood, the general manager of the Daleville location.

There is the absolute truth that convicted criminals whom have done their time truly deserve the opportunity to make a living.  Unfortunately, for many, rates of recidivism are high when financial success is not immediate.  In Henderson’s case, he voluntarily turned in the gun and was arrested by police on second degree theft.

The Daleville Department of Public Safety police sergeant took the opportunity to remind concealed carriers that there are legal means of transporting a firearm that do not include leaving it unattended in a room.  He suggested that it’s fine to carry it, transport it in the vehicle, or even drop it off for temporary storage at the Daleville police department.

So next time you’re staying in a hotel or motel, remember to secure your firearm on your person or lock it up in a safe or similar situation.