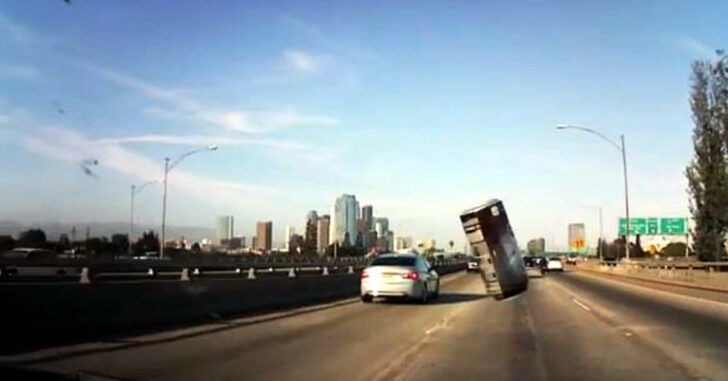 We’ve previously covered a bunch of road rage incidences — some ending in favor of the concealed carrier and others not so much.  In this article, we’re going to address some of the common factors observed across the board and talk about ways to de-escalate a perceived threat while driving.

It’s not always possible to do both at the same time.  For example, in order to take an active mental inventory of how you’re feeling, some attention may stray from things going on around you.  Conversely, if you’re paying attention to the world around you, your own internal thoughts may have faded into the background.

This is why observing stress points is important, though.  Just as important as understanding that some fool in a motorized vehicle cut you off at 80 mph and then hit the brakes, is recognizing that this action has affected how you emotionally handle the situation.  If you’re human, you’re going to fear loss.  This fear, once realized, can sometimes transform into anger.  This anger will cloud your judgement.  And the fact that someone was so inconsiderate that he or she would needless jeopardize you, your vehicle, your commitment to arrive at a particular destination, or even the well-being of those in the vehicle with you — it’s enough to get a person’s blood boiling.

The common consolation is “get over it”.  But what if you can’t?  What if this guy’s actions are the tipping point?

Here’s a friendly reminder: you are always in control of your own actions.

You’re allowed to feel any emotion you want.  Your actions are what you will be judged by.  Consider wisely and recognize this as a stress point.

That’s right.  Another driver can veer right in front of you, jam on the brakes, drive like a jackass and you have to keep your cool.  What sort of monkey business is this?  It’s reality.  You’re an armed member of society.  And that society operates by laws and rules.  Here’s a couple guidelines to keeping your encounters with the other driver above board. Just because the other driver did something callous or stupid doesn’t give you permission to do the same.  Consider everything you’ve worked to achieve in this life and everything you have.  When you idly create conflict, you jeopardize all of it.  Plenty of people have tried and plenty have lost near everything in the fallout. You know there’s at least one bonafide idiot on the road.  What are the chances that there’s another right behind him?  Especially around peak traffic times, drivers all tend to get a little crazy.  In your haste to stay “on top of” that first driver, you may be driving into a second, third, or even fourth one.

What’s a good example of this?

Ever drive down a congested highway and notice one lane has screached to a halt while the other one is moving sluggishly?  What happens?  Drivers inevitably try to switch sides which leads to a lot of potential “stress points”.  Now we’ve discovered one lane is — lo and behold — closed down by some traffic incident or accident.  Now the true idiotic games begin.  Ever notice how truckers just stay in the same lane and keep plodding along?  It’s because it works.  It doesn’t matter how many times you get cut off — you will get to your destination.  If the guy (or gal) in front of you or behind you doesn’t seem to get that, fine.  Let them do it their way.

Rule #3: Hone The Difference Between Self-Defense And Unchecked Anger The law is interpreted by judges, police, and attorneys.  Given enough resources, time, and money, there are all sorts of revelations that may take place.  For the common man, the worst question he can ask himself is, “can this be interpreted as a legitimate act of self-defense?”  He probably wouldn’t use those words.  The words are generally, “I feel threatened and I am responding to the threat.”

Guess what?  Both are wrong.  You feeling angry has nothing to do with your safety.  You not arriving on time to your destination because somebody is acting the fool on the road is not a justifiable use of a firearm.

And lastly, if you’re at a stop light and someone gets out and begins to approach your car — you need to be of sound enough mind to recognize that as a real potential threat.

Rule #4: If You’re Both Stopped, Don’t Get Out Of The Car You can bet if you’re both parked at a stop light after some road rage was expressed (by either side), neither of you are in the mood to talk.  The worst thing you can do is present yourself as a legitimate threat.  The way you would go about that is exiting your vehicle and approaching the other person’s vehicle.  Now you’ve shown your hand — and that person is free to interpret your actions.  Can you guess how that person will interpret your actions?

Avoid the conflict at all costs unless a clear and present danger expresses itself.

Rule #5: If You End Up In An Accident, Maintain Control Of The Situation If a road rage incident ends in an accident, it’s best to keep it basic.  Take pictures of the accident — its impact points, any telling features such as skid marks or pavement scratches.  Keep the conversation clean, stick to the details, and move on.

In a vehicular accident, you are not obliged to talk with the other person.  You can call the police and they’ll arrive at the scene and the police officer can take the exchange of information for insurance purposes.  He can also act as a calm reminder that everything needs to be kept “above the belt”.