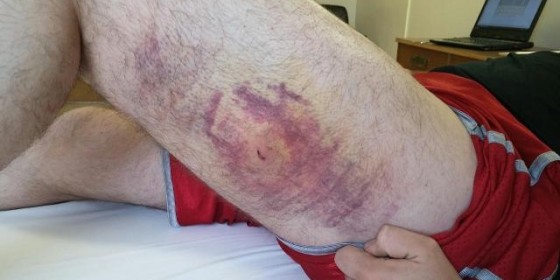 Cody Deneault is the man who had a negligent discharge in a Kansas movie theater just a few days ago, and now he has given his side of the story and an excuse for what happened.

“I just had an accident. Accidents happen to everybody, even professionals.”

I have to disagree. Completely. I looked up Cody on Facebook and while he isn’t a fan of Concealed Nation, he is a fan of other concealed carry and firearms pages. Why was I looking? Because we post numerous articles about safe firearm handling.. and it’s people like Cody who need to read them the most.

Cody tells interviewers that he’s former military and that his experience with firearms has nothing to do with what happened, because “accidents happen”.

“I think I either bumped the trigger or pushed it the wrong way or something and it went off,” Cody said.

The reason that the gun went off, says Cody, is because he was trying to reposition the gun in his pants pocket.

“I’d say my biggest mistake here was probably I didn’t have a holster,” he said. “And that is on me, for sure.”

I have all the evidence I need to make a solid conclusion: Cody, this was negligence. It was not an accident. Negligence is carrying a firearm in your pocket with no trigger protection. Negligence is blindly adjusting your unsecured firearm in a dark movie theater with many people around.

You’re lucky you didn’t shoot someone else besides yourself, Cody.

And if anyone asks my opinion of whether or not you should be allowed to carry a firearm, I say you aren’t ready… regardless of how much training you have under your belt. Your negligence put lives in danger, and that’s not something to be brushed off as an accident.