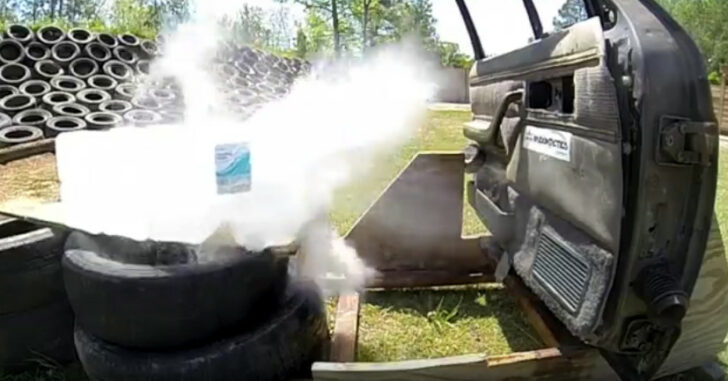 Getting caught in your vehicle in a gunfight is like being the fish in the ole “shooting fish in a barrel” saying.  While plenty of gangsters seem to think shooting from a vehicle makes a whole bunch of sense – any amount of ballistic testing shows that car doors provide little to no actual protection against even small caliber rounds.

But even with that slight layer of protective foam, plastic, and some metal – what are we really looking at?  Can a car provide decent cover from aggressive fire?

As you’ll see in the video, at 7-8 yards (~21+ feet), all rounds are effective – i.e. penetrate door and penetrate the plywood behind the door.  Effectively, it dispels the idea that a door is adequate cover for most pistol ammunitions.

But don’t take his word for it (or ours).  We scoot ahead to another video of two good ole’ boys doing a series of tests on the rear door of a ’93 Oldsmobile.  Forgive the shaddy quality of the video.

The reason why this video is interesting is because they’re using a .44 Magnum.  Depending upon where they hit in the door’s frame, bullet penetration could either deflect or go all the way through.

Needless to say, even a good classic automobile doesn’t afford much in the form of protection.

And last – but not least – is this very good test done by a gentleman using blackout .223 rounds fired from his AR-15 at a distance of approximately 25 feet (~8+ yards).  He actually sets up a series of water buckets to determine actual penetration.

In almost all cases, we’re seeing bullet penetration easily through the first door and often getting caught up or deflected by the second.

Final conclusion?  A bullet will penetrate given that it has the proper velocity, mass, and placement along the door frame.  Depending upon what it collides with, it may veer off from target – giving a non-ideal flight trajectory.  This means that a person driving car, taking fire, may get lucky – but never dependably so.

The more layers of metal, foam, and insulation between the concealed carrier and the incoming round, the more opportunity there is for a non-ideal deflection to occur.  However, this can unfortunately work out poorly in the case of ricocheting rounds inside the vehicle.

What about using the entire mass of the car as cover?

The problem with using static vehicles as cover is that they provide highly inconsistent cover throughout.  The greatest coverage exists by the back wheel-well of a car or truck.  There is more surface to hide behind, more density between incoming round and person.  Unfortunately, most modern vehicles have their gas tanks rigged to the back.  So essentially, you’re hiding behind a reservoir of volatile liquid, hoping no round penetrates through steel and plastic to get to you before it strikes that liquid.

If you’re able to – use vehicles as intermittent cover while moving to a more secure location.  They operate better as a form of concealment (i.e. obscuring you from your target) than they do provide any degree of reliable cover from incoming fire.

Previous article: Americans Should Be Allowed To Carry Guns On Airplanes Next article: Concealed Carry Trainer Negligently Shoots Student, And It's Not His First ND (*facepalm*)