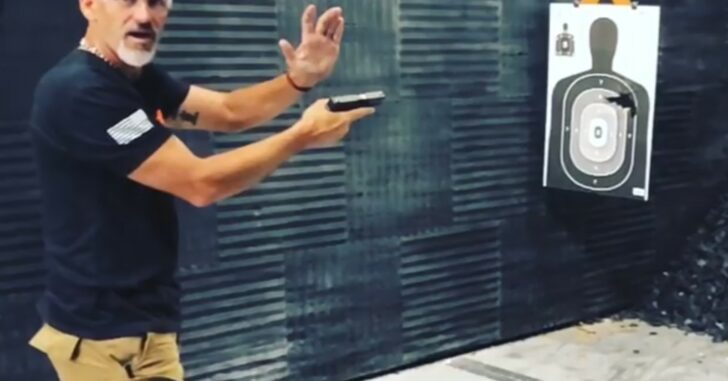 We’ve talked about the dreaded Squib Load a number of times on Concealed Nation because it’s very important to recognize this type of failure, as it can have very dangerous consequences.

For those unfamiliar with a Squib Load, it is defined as follows:

A squib load, also known as a squib round, pop and no kick, or just a squib, is a firearm malfunction in which a fired projectile does not have enough force behind it to exit the barrel, and thus becomes stuck. This type of malfunction can be extremely dangerous, as failing to notice that the projectile has become stuck in the barrel may result in another round being fired directly into the obstructed barrel, resulting in a catastrophic failure of the weapon’s structural integrity.

Just a few minutes ago, Rob Pincus of Personal Defense Network uploaded a video of his on Facebook showing a squib load that happened to him while trying out a folding Glock. As with any squib load, it wasn’t the gun’s fault. But who is to blame?

But in all seriousness, knowing how to recognize a squib load is extremely important. Rob has been around firearms long enough to recognize this instantly, but not all of us have had first-hand experience with a squib.

How To Determine That You’ve Got A Squib Load

The dead giveaway of a squib load is this: It doesn’t sound like a normal shot being fired and may be much quieter or muffled in sound. If something doesn’t sound right, clear your firearm and check your barrel for any obstructions. *Note: DO NOT look down your barrel. Find something that won’t scratch your barrel, such as a pencil, to place inside the barrel to ensure that is indeed clear. This is done after you have removed the barrel from the firearm.

A Squib Load is usually caused by a round having a primer, but no (or very little) powder. Reloaded ammunition usually the culprit of this type of malfunction.

If something doesn’t sound right, always be cautious and check things out before continuing.