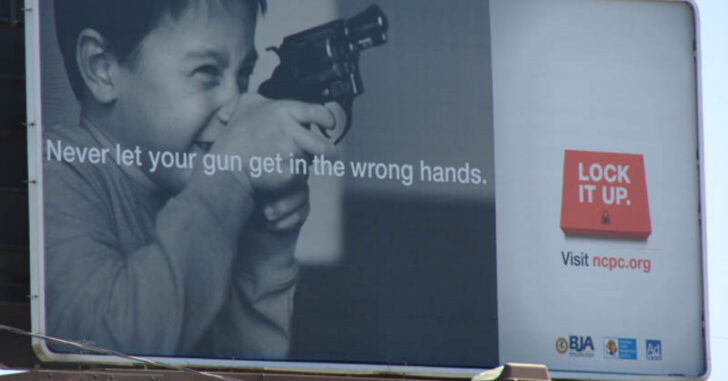 By Dean Weingarten via TheTruthAboutGuns.com

What’s wrong with this picture? It gives the impression that small children gaining access to firearms is a big problem. It isn’t. The number of children under five who die in firearm accidents each year is, thankfully, in the single digits. In a country of 313 million people and 347 million firearms, that is a remarkable safety record. So why the picture of a four-year-old with a revolver  . . .

Simple. Shock propaganda aimed at the non-gun owner. An attempt to further demonize guns amongst the ignorant and antagonistic (or some combination thereof). If you dig into the campaign further, you’ll see the ad as an attempt to push gun owners to lock up their guns when “not in use.” The ad is couched in terms of in terms of “gun safety,” pushing the idea that all guns should be “locked up.”

The anti-gun agitprop was created by the “National Crime Prevention Council,” ye olde McGruff the Crime Dog folks, funded by the Bureau of Justice Assistance. It’s distributed by The Ad Council, a propaganda organ of the ruling elite thinly disguised as a non-profit; enabled by air time, print and billboard space donated by the mainstream media.

This campaign “happens” to echo the latest push for gun control by the left: the San Francisco ordinance that any handgun in the home that’s not being carried on the person of an adult must be locked up. An idea echoed in a proposed Los Angeles ordinance. But there is no evidence that requiring guns to be locked-up reduces accidents or crime or suicides. From the study by Lott and Whitley (pdf):

It is frequently assumed that safe-storage gun laws reduce accidental gun deaths and total suicides, while the possible impact on crime rates is ignored. We find no support that safe-storage laws reduce either juvenile accidental gun deaths or suicides.  Instead, these storage requirements appear to impair people’s ability to use guns defensively. Because accidental shooters also tend to be the ones most likely to violate the new law, safe-storage laws increase violent and property crimes against law-abiding citizens with no observable offsetting benefit in terms of reduced accidents or suicides.

Some would argue that the campaign only asks people to secure their guns voluntarily. I suggest the idea is to demonize guns and promote the concept that guns are bad and should be locked up. I will change my mind when the Ad Council starts doing public service announcements that urge responsible people to carry guns to reduce crime.  I would even accept a “Do You Carry?  Get Trained” campaign.  I think I will be waiting a long time.

©2015 by Dean Weingarten: Permission to share is granted when this notice is included.
Gun Watch

Previous article: Show Your Independence By Carrying On Independence Day Next article: HONEST MISTAKE: NC Tower Climber Arrested In NJ For Possessing Firearm; This Man Needs A Pardon, And Our Help