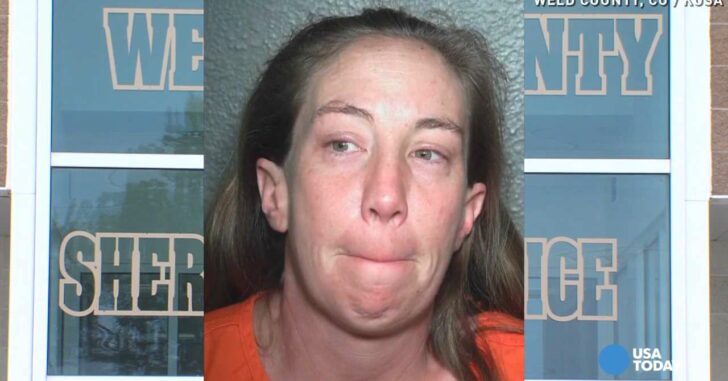 WELD COUNTY, COLORADO — A mother of three children is being held pending an investigation into her role in endangering the lives of her three children while she attempted to burglarize the home of a retired police officer.  K-USA reports that Melanie Romero, 35, allegedly parked her vehicle and left her three children inside while she entered the residence of Kim Steffen-Brauch.

The home owner was napping inside when she reportedly heard the footsteps of someone moving around in her living room.  Noting that she always keeps her handgun close by, she picked it up in time to find the perpetrator standing in her doorway.

“That’s when I asked her, ‘what the ‘blank’ are you doing in my house? Put your hands up. Let me see your hands,'” Steffen-Brauch said.

A perfectly reasonable question, don’t you think?  Sure beats the alternative of what a lot of home owners have done when they discover someone breaking into their house.

Romero allegedly responded that she was trying to meet a friend and accidentally walked into the wrong home.  Well, she was right on one count – she did walk into the wrong home.  Steffen-Brauch wasn’t buying any of it.  Once she secured the would-be burglar, she called police whom then discovered Romero had left her three children alone in her vehicle parked out front.

Now police allege that Romero may also be responsible for other burglaries reported in the area.  In the meantime, she’s being held pending a bond hearing.  She’s being formally charged with trespassing and child endangerment.

As for Steffen-Brauch, she reported to K-USA that she’s definitely considering some renovations in her home security system after this break-in.  But certainly, this former police officer made the right call in keeping her firearms close by.

Using Minors As Collateral?  Hopefully Not A Trend

The frightening thing about this incident is how poorly it could have ended.  When a home owner discovers someone is in their house, it’s milliseconds for critical life and death decision to be made.  And in the case of this home owner, she inevitably saved this woman’s life more than she may realize.  Best of yet, she saved that woman’s children from the anguish of losing their mother.

This was a lose-lose scenario from the start.  The best possible case is the one that resulted.  Anything else – a successful heist, a successful shooting of someone invading a home – would have inevitably caused far more grief and suffering.

And as it turns out, the alleged perpetrator in this case appears to have made a small career out of it – robbing other homes in the area before being apprehended at Steffen-Brauch’s residence.  How many more would she have gone on to burglarize before it ended tragically for her children?

Thankfully, this is a day where the good guys surely won.  And while it’s sad that these children will probably go into child custody services – there seems to have been little hope that Romero would have stopped her habits.  More importantly, she endangered their lives in the process.

And conversely, on the homeowner’s side, this is a situation potentially fraught with disaster.  There’s almost no way of knowing when someone is breaking in whether or not they have children nearby.  There’s just the immediacy of reaction and adrenaline.

How do you think you’d act in this situation?  Is this ever a consideration for you when you’re working on your home defense plan?  Tell us about it in the comments section below.