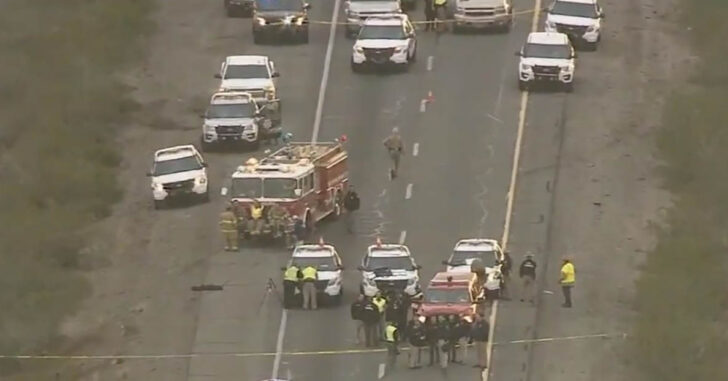 TONOPAH, ARIZONA — A state trooper was shot by a random suspect as he was trying to help a woman who had just had her vehicle roll over on the highway.

Described as an ambush-style attack, the trooper was attempting to block lanes of the highway when a man came up and shot him in the chest. A fight between the two then began on the ground.

A driver saw what was happening and tried to come to the aid of the trooper, who was asking for help. The suspect ignored the man’s commands to stop the attack, at which time the man went to his vehicle to retrieve his firearm.

He ran back to the scene, shooting and killing the suspect.

The trooper, a 27-year veteran of the force, was taken to the hospital in stable condition and will undergo surgery.

After shooting the suspect, the armed citizen used the trooper’s radio to call for help. That audio can be heard in the video below.

The woman involved in the rollover was ejected from her vehicle and died at the scene.

Arizona Department of Public Safety Col. Frank Milstead told reporters that he has not yet spoken with the armed citizen, but sent out the following message to him:

“Thank you because I don’t know if my trooper would be alive today without your assistance.”

Not only did this armed citizen have the right mindset to stop the suspect, but he also kept a straight head after the shooting in order to utilize the trooper’s radio to make a direct call for help.

It’s an incredible story of bravery and the successful use of a firearm by an armed citizen to save a life.

Previous article: Armed Man Fights His Way Out Of Ambush By Five Teens, Shoots, Kills One Of The Attackers Next article: [VIDEO] Cop Wannabe With Serious Road Rage Issues After Pulling Gun On Driver