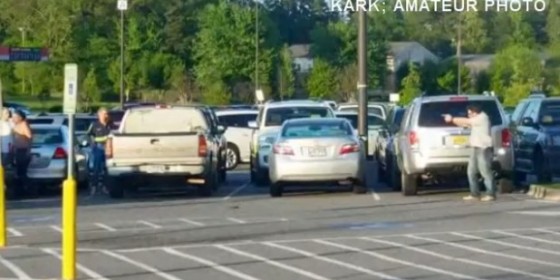 LITTLE ROCK, ARKANSAS — A 24-year-old man with a concealed firearm was walking out of a Kroger grocery store when he noticed a group of 7 people surrounding an elderly man, and at least on of them was attacking him.

That’s when the armed man, identified as Gene, decided to get involved by drawing his firearm.

With the gun drawn the attackers turned their attention.
“They kept yelling this isn’t your fight, you need to walk away you need to put the gun down,” Gene says.

People in the area started taking out their cell phones and recording the incident. One woman was recounted by Gene as having called 911 to report a man with a gun. Helpful.

By the time police arrived to the scene, both the group of people and the elderly man had taken off. As it turns out, they were all related. Police say the man was an uncle being assaulted by his nephew.

When Gene was asked whether he would have done the same thing after knowing what happened, his reply was yes. “If you see a crime happening and you see someone getting injured and you the ability to stop you should,” he said.

The uncle was left with a bloody face, but declined to press charges against his nephew that was responsible for the assault.

It’s also important to note that this happened in a Kroger parking lot. You know. . .that chain that Mom’s Demand Action tried to strong-arm into turning their stores into “gun free zones”.

Previous article: Woman Negligently Shoots Herself After Hot Brass Goes Down Her Shirt Next article: One Suspect Accidentally Shoots Another Suspect During Violent Home Invasion