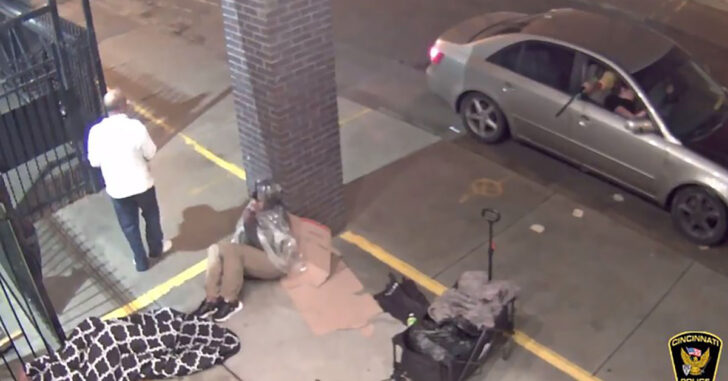 CINCINNATI, OHIO — Three people were arrested after police say they drove up to homeless people around the city and shot them with a bb gun. Surveillance video captured some of the incident. A total of 7 people were shot, with at least 2 of them being homeless.

Another person shot was a bar owner who had just left work. As he was walking, the trio pulled up and asked him for directions before opening fire.

NEED HELP IDENTIFYING: In the early morning hours of June 3rd, the people seen in this video targeted homeless people throughout OTR by shooting them with a BB gun. This specific incident occurred at 1615 Republic Street. The car is a light colored 4-door sedan with a dark hood. pic.twitter.com/TEC46juv7O

The public came to the aid of police to help catch the three people, comprised of two sisters and a man.

Police said the public helped them identify sisters Brittany and Kelsey Hopper, who turned themselves in on Tuesday.

From a defensive standpoint, I see no reason why a target could interpret an attack such as this as a deadly threat. It’s impossible in many cases to distinguish a bb gun from a real gun, especially at night. If someone had fired back in self-defense with a real gun, I believe that they would be found justified in their actions.

Previous article: Home Invader Shot And Killed In Crime-Surging New Orleans Next article: If You Call Police For Help, Don't Have A Gun In Your Hand When They Show Up