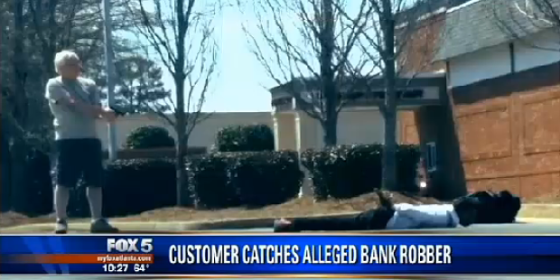 COBBS COUNTY, GA — A bank customer noticed something was off while a man was engaging with a teller on Wednesday, and decided to make a move of his own.

Police say 25-year-old Mark Katchem walked into the bank, and slipped a note to the teller demanding money. A customer, who was inside, noticed what was going on, followed the alleged crook out the door, then ran to his car and grabbed his gun.

Police say the customer ordered Katchem to the ground and held him there at gunpoint until police arrived.

Open and closed case. But would you have done the same? While the only details we have to go off of are above, it seems that the robber was not armed. Granted we wouldn’t necessarily know this at the time of the incident, he still may have been armed.

So again, would you have done the same thing as this customer did?

My two cents: Based on the story, I do not think that I would have felt like I was in imminent danger, nor anyone else. Also, I would have been carrying my firearm, negating the need to retrieve it from my car first (if I felt I needed it). If I had the time to get to my car, grab my gun and then go after the robber, I also have time to get a safe distance away while calling police with a detailed description of the robber.

While I commend this armed citizen for making the choices he did, the way this scenario played out doesn’t seem like it’s for me.

Previous article: A Casualty Of VIOLENCE, Not Concealed Carry: Pair Of Robbers Pick Wrong People To Rob, One From Each Side Dies Next article: SPECIAL DELIVERY: Another Fake Home Delivery, Gunman Draws Gun On Nanny And 3-Year-Old