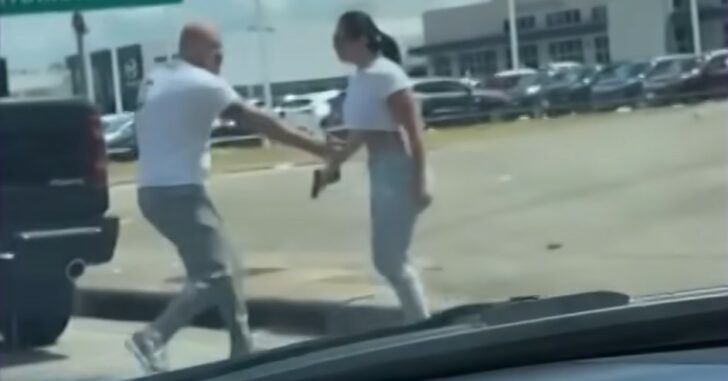 HARRIS COUNTY, TEXAS — Two people have been arrested following a road rage incident in which a woman fired 2 shots at a vehicle, grazing the driver and luckily missing the 2-year-old in the back seat.

The 40-year-old woman, Nazly Ortiz, was arrested and charged with aggravated assault. She’s the big smarty pants who fired the rounds.

The man she was with, identified as Benjamin Greene and also arrested, is charged with assault.

Both have been charged by us as morons.

Video of the incident was captured by a nearby driver, who luckily wasn’t injured during the terrible actions of both of these individuals.

This afternoon, two parties were involved in a road-rage incident while driving north on 45 near 1960. Victim was driving his car with his 2-yr-old son in tow. Victim exited 45 at Parramatta as suspect truck followed. Both vehicles came to a stop. Male driver/suspect in the 1/3 pic.twitter.com/ukmMHcN5vq

truck approached the victim at his car & allegedly assaulted him. Victim began to flee as a female suspect/passenger in truck exited w a handgun & fired into the backseat passenger window. Victim continued to drive as the female suspect wildly fired a 2nd shot at him. A car 2/3

dealership building was also struck. Victim was transported to a hospital with a possible graze wound. The male is in good condition. No other reported injuries. Nazly Ortiz (5-16-82) has been charged with Aggravated Assault & Benjamin Greene (12-17-87) with Assault. #HouNews 3/3

It’s apparent that these two have anger issues, and should not be let off easily, especially the woman. By her actions, it’s clear that she is a danger to society with a temper like that, and should absolutely spend some solid time behind bars.

Previous article: [VIDEO] Man Lucky To Be Alive After Suspect's Gun Malfunctions Multiple Times Next article: Intruder Shot In The Neck By Armed Homeowner Who Awoke To Noise