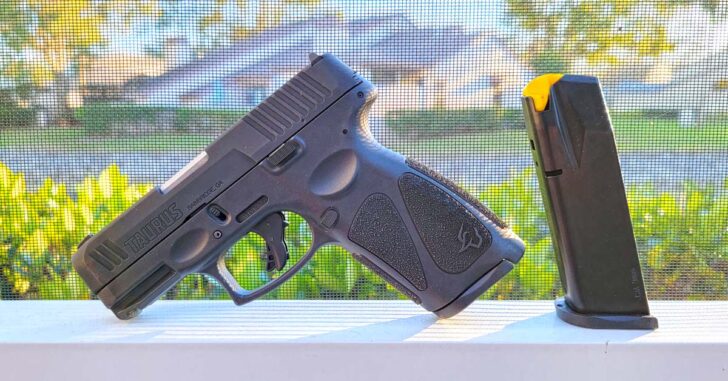 There is no denying the Taurus G3C is one of the most popular selling handguns in today’s market. Ask any gun store owner or holster producer and they will tell you the G3C is in high demand. Shooters enjoy the sub-compact size, the single action trigger and the 12 round capacity at a budget price. Then, there is the full-size Taurus G3. The G3 also became very popular at a budget price. The G3 embodies the G3C features but has a four inch barrel and a longer grip with magazines that carry 15 and 17 rounds of 9mm. Imagine if Taurus could mate the two pistols to create a handgun that offers the greatest qualities of the G3C and the G3.

Well today, January 18, 2022, Taurus is introducing the NEW G3X handgun. The Taurus G3X took the G3C slide assembly and the full-size G3 magazine capacity (15 rounds) to create a new offering for 2022. The features include everything that shooters enjoy about the two pistols. Therefore, the “G3” platform remains the same however the new configuration offers much to be appreciated. The G3X has the same grip length and texturing as the full-size Taurus G3. The larger 17 round magazine will work just fine with the G3X as well. The slide assembly mimics the G3C slide, however there is one exception.

Thumbs Up or Thumbs Down?

The thumb safety has become common throughout the evolution of the Taurus G3c. We saw it on the PT111, the G2C and the G3C. I have learned that shooters have a love/hate relationship with thumb safeties. Many feel a thumb safety gives them a feeling of comfort knowing when it is engaged the pistol will not fire. Other people feel that thumb safeties are nothing more than a distraction. Here is the deal, Taurus did not include a thumb safety on the new G3X. I am one of those guys who prefer the absence of a thumb safety so in my eyes, it was a great move by Taurus.

The bottom line is this. Shooters prefer options. They like to know their favorite firearms are available in a way for them to be successful carrying, shooting and enjoying at the range. Taurus has met the demand with the G3X by adding additional capacity while keeping the upper slide subcompact with a 3.2” barrel. Shooters who are familiar with the Taurus G3C will have no problem adjusting to the additional grip length on the G3X. The slide serrations, sight system, trigger assembly and shooting impressions are consistent with the original Taurus G3C.

When Taurus came out with the T.O.R.O. (Taurus Optic Ready Option) handguns, shooters who love red dots on pistols were very pleased with the new option. Taurus made the mounting system extremely simple with plates that fit several of the most popular red dots in today’s market. Will Taurus come out with a G3X T.O.R.O. model. At this point, it is yet to be known however we know that Taurus is always improving, modifying and innovating their line of pistols. If the shooting world desires it strong enough, it is my guess that Taurus will do it. One thing is for certain, the Taurus G3X will be a big hit for 2022.