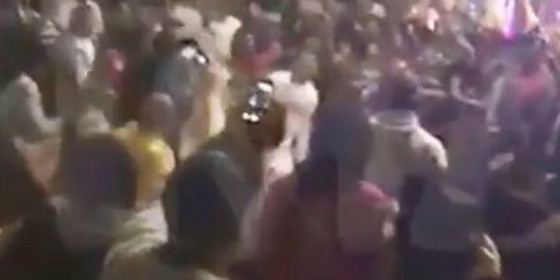 ALBANY, NY — At least six people were stabbed during a rap concert at The Armory in Albany, NY on Saturday night.

All six stabbing incidents and the assault and robbery were all reported to police within a one hour period Saturday morning between 12:50 and 1:50 a.m.

Witnesses say the event was terrifying. One witness, who wanted to remain anonymous, said “I just saw non-stop fights, large crowds of just brawling literally like riots. People getting hit with rails like this and getting knocked out, totally knocked out on the floor.”

Two of the victims were found at the venue, two had taken themselves to the hospital, and two others were found at a residence. All injuries were said to be non-life threatening.

Another report came in of a woman who was beaten inside the women’s bathroom in the venue. “Six individuals followed the victim into the bathroom, kicked and punched her about the face and body and stole property from her purse,” said Steve Smith of the Albany Police.

It is unlikely that Shannon Watts and her partner in crime Michael Bloomberg, or anyone else, will be looking for any type of knife control legislation to be drafted up. . .or we could be completely wrong. This is New York, after all.

We tried reaching out to The Armory, but their website and Facebook page are completely inaccessible, and their listed phone number does not seem to be working.