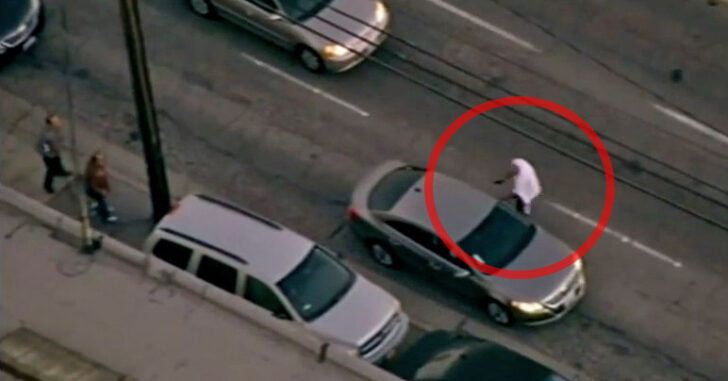 Just a few weeks ago, we published an article on Carjacking and Concealed Carry and provided some tips that could help during a situation such as this.

If you start the above video around the 0:50 mark, you’ll see a suspect driving a car GTA-style through Los Angeles when he ultimately crashes. Looking for a new vehicle, the suspect approaches a driver at the 1:00 mark. That driver has enough sense to hit the gas and GTFO of the immediate area. Wise choice. Suspect unsuccessful at carjacking the white vehicle. Vehicle speeds away, suspect continues on to find a willing victim.

The suspect then approaches another vehicle and this time, the driver is caught off guard to the point where the suspect has a fancy new car to continue on with his rampage.

The screenshot below shows the suspect running up to the 2nd vehicle that was just feet away from the 1st vehicle he tried to take control of. This 2nd driver should have had a clear view of what just happened in front of him or her, and had plenty of time to hit the gas to get out of harms way. Run the guy over? No problem! However, that’s not what happened. Whether you carry a firearm or not, you should be well aware of the things happening around you. The driver of this 2nd vehicle should have had enough information to go on based on the events that took place right in front of them, and had time to hit the gas and get away as the suspect was approaching. If that were me in the 2nd vehicle and I was armed, I would be hitting the gas while at the same time knowing that my firearm was in my right hand, ready to defend. The point is to get away from the threat as quickly as possible if you are able.

The suspect was eventually caught after trying to carjack another two vehicles when he was stuck in traffic. Rush hour can be such a…

Previous article: [VIDEO] Must Watch For Any Women Who Carry A Firearm Off Body Next article: Recently Released Criminal Shot Dead By TX Homeowner After He Tried Breaking In