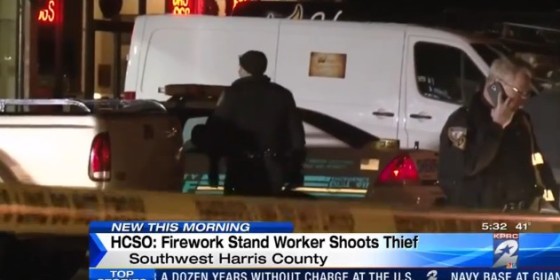 It’s a really punny title, I know. Two armed men thought it would be a great idea to try and rob a fireworks stand in Texas. They attempted, and failed.

The owner of the stand was not injured, but the man who pulled a gun on him was not so lucky. As one man waited in a vehicle, the other got out and walked up to the owner demanding money. He had a firearm in his hand, and that’s when the owner pulled out a firearm of his own.

The two exchanged shots and the suspect was hit multiple times and later taken to the hospital. The fireworks stand owner was not injured.

The two robbers are said to be involved in many other fireworks stand robberies in the area. The driver is still on the loose. He apparently left his buddy behind once the bullets started flying.