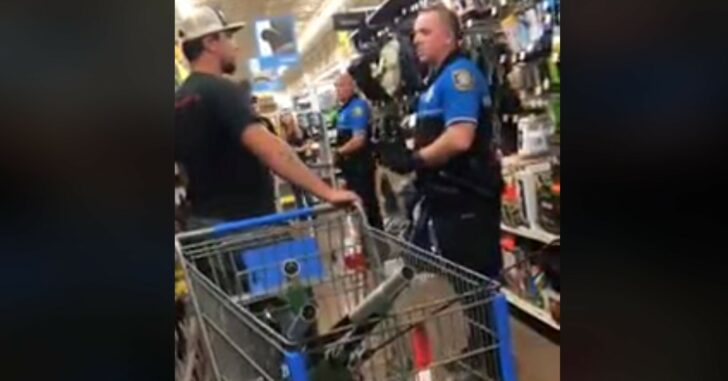 While police have not filed any charges against the man, a Lexington, Kentucky Walmart has made him sign a statement that he is aware of his nationwide ban at all Walmart locations.

Someone had called police to say that an armed man was inside the store and was acting suspiciously. According to that suspicious man, he was sitting in a lawn chair by the firearms counter waiting for help.

A video was taken of the man’s interactions with police while still in the store, and can be viewed here:

A video interview with the man can be seen here.

If you’ve followed Concealed Nation for any length of time, you’ll know that I’m not one to open carry. That doesn’t mean I don’t support it. What this gentleman did verses what this idiot did are two completely separate things.

While Walmart still allows concealed carry in their locations, it looks as though many would have some trouble if they do actually try to openly carry a firearm. Who knows how this will play out on a store-to-store basis, but it doesn’t look good for those who choose open carry over concealed.

What do you think about this man’s nationwide ban at ever stepping foot inside a Walmart? Would you have signed the statement?

Previous article: 70-Year-Old Concealed Carrier Stops Man Armed With Knife Inside McDonald's Next article: Man "In Good Spirits" After Shooting Himself In The Testicle While Holstering