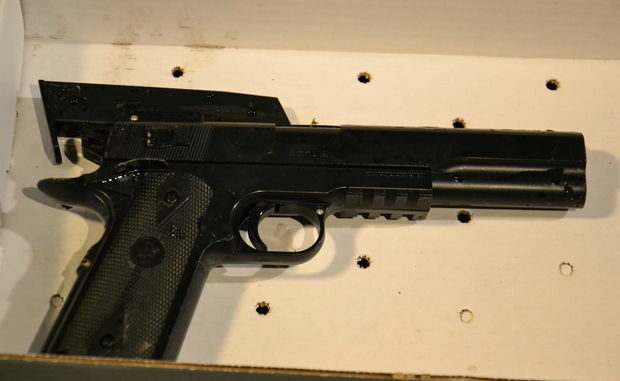 Reports are coming in that involve a shooting incident earlier today where a Cleveland police officer shot a 12-year-old boy who had a bb-gun in his waistband.

According to police, a 911 call was made that described a person with a gun. When police responded to the area, they found a group of people sitting under a pavilion. Police noticed what appeared to be a handgun on one of the tables, and witnessed one of the people pick it up and put it in his waistband.

Then, the two responding officers got out of their car and told the boy to put his hands up. Instead, the boy apparently reached into his waistband and drew the firearm, at which time one of the police officers fired two shots. The boy was hit once in the stomach and taken to the hospital in serious condition.

“We don’t come to work everyday and want to use force on anybody,” [Deputy] Tomba said. “That’s not what our job is. We’re part of this community.”

The news article states that the police officer who fired the shots was a ‘rookie officer’. While this is a sad series of events, I’m not quite sure that’s important information. Based on the picture, there is no way for a person to determine if they are looking at a real or fake firearm, and certainly can’t determine that from a distance.

As a person who carries a firearm, I can’t say that I would have acted any differently if someone had drawn a firearm on me and pointed it in my direction. Again, it’s very difficult to determine whether it was real or not, and it should have never been drawn in the first place.