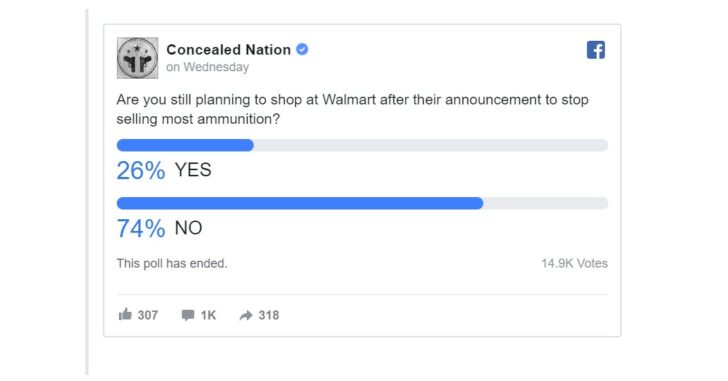 A few days ago, we posted a poll on Facebook that asked the following question: Are you still planning to shop at Walmart after their announcement to stop selling most ammunition?

With tensions running high, I was still surprised at the results;

An overwhelming amount voted NO, indicating that they would no longer shop at and support Walmart.

Along with their announcement to stop selling certain ammunition, they also asked customers not to openly carry firearms at their Walmart and Sam’s Club locations. This, in turn, made a few other big names come out and say the same thing; Kroger, CVS, Walgreens and Wegmans to name a few.

All have shifted their policy regarding open carry, and are now simply saying “Please stop openly carrying firearms inside our locations.”

Let’s move along with this further. We just put up a new poll moments ago:

We’ll see how these results end up looking like.

Until then, I have a hard time believing that 74% of polled people in the first poll say that they won’t shop at Walmart anymore. Historically, we’ve seen this talk before, but having it become a reality in action is another story altogether. Answering “NO” in a poll isn’t the same as driving by a Walmart with your wife and she says “Hey we need to stop and get some things.” Some of those “NO” people will still go.

Truthfully, does it matter to most that we have Anti-2nd Amendment business lists? How many people follow it truthfully, AND do something like mentioning to someone in that store why they won’t shop there. Or sending an email to corporate. Is it mostly just social media talk?

What do we do to actually try and get policies to change in the gun owner’s favor? Do we have a voice that’s the same or stronger than places like Mom’s Demand Action?

Previous article: 70-Year-Old Concealed Carrier Stops Man Armed With Knife Inside McDonald's Next article: Man "In Good Spirits" After Shooting Himself In The Testicle While Holstering