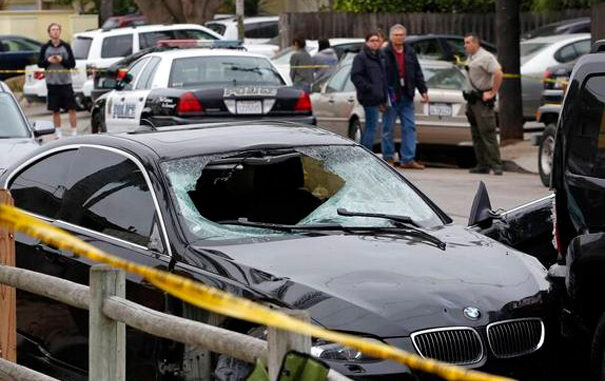 Update 05/24/2014 @ 10:10pm EST (source)
-The shooter’s family contacted police last week out of concern over disturbing videos he posted
-Officers interviewed him and found him to be a ‘perfectly polite, kind and wonderful human’

It’s not a gun problem, it’s a mental health problem.

According to authorities, a 22-year-old (we aren’t posting his name for a reason, and that reason is this: his name is unimportant and we will not give him any satisfaction of posting it) is the lone suspect in a disgusting rampage that happened last night in a small Santa Barbra beach community. While driving around in his BMW, this individual began to open fire on pedestrians in a seemingly premeditated attack.

His reason was apparently captured in a video that he posted (below). Here is a portion of the transcript from that video:

“For the last eight years of my life, since I hit puberty, I’ve been forced to endure an existence of loneliness, rejection and unfulfilled desires, all because girls have never been attracted to me,” he says on the video shot inside a car. “Girls gave their affection and sex and love to other men, never to me.”

“I’m 22 years old and still a virgin, never even kissed a girl. And through college, 2 1/2 years, more than that actually, I’m still a virgin. It has been very torturous.”

“I will have my revenge against humanity. I will punish all of you for it.”

“I will be a god compared to you, you will all be animals, you are animals and I will slaughter you like animals. I’ll be a god exacting my retribution on all those who deserve it and you do deserve it just for the crime of living a better life than me.”

Any shooting such as this is an obvious mental health issue with the individual(s) involved. This young man, for whatever reason, decided that this would be the best way to get back at a world that he felt had turned it’s back on him. Can you tell that something may be wrong with his ways of thinking?

PHOTO: Another view of the scene in Isla Vista after a shooting near UCSB. Info still coming in. (via @kendallcolee) pic.twitter.com/pepmv07biQ

The shooter had apparently encountered many people during his rampage. California’s ridiculous gun control laws are probably a good reason why an armed citizen wasn’t able to stop this nut job from killing more people. Instead, we see this one play out just like the rest…wait and cower until the police get there to either a) take him out or b) leave him no choice but to end his life himself.

To see just what we’re talking about here, you can watch his last video below. It won’t take long to notice that this young man had some definite mental issues going on.