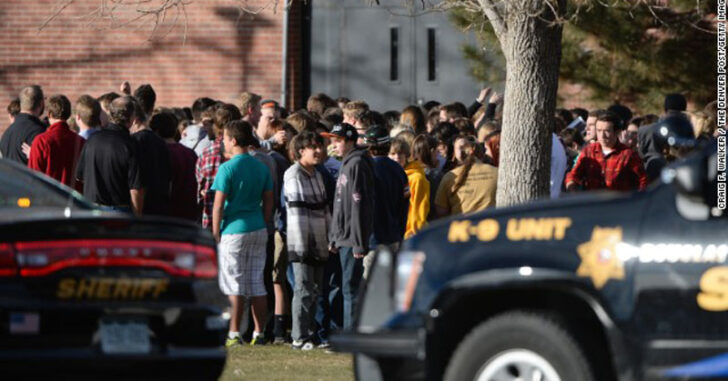 You heard it right, gun grabbers. The recent shooting in Colorado at Arapahoe High School happened to have a Deputy Sheriff on school grounds who was working as a school resource officer, according to a CNN report. He was in the vicinity of the shooter when the rampage began and was able to end the violence in 80 seconds. The initial reports were stating that the police took 14 minutes to arrive on the scene, but we are now learning that wasn’t what ended the shooting.

The rampage might have resulted in many more casualties had it not been for the quick response of a deputy sheriff who was working as a school resource officer at the school, Robinson said.

Once he learned of the threat, he ran — accompanied by an unarmed school security officer and two administrators — from the cafeteria to the library, Robinson said. “It’s a fairly long hallway, but the deputy sheriff got there very quickly.”

He praised the deputy’s response as “a critical element to the shooter’s decision” to kill himself, and lauded his response to hearing gunshots. “He went to the thunder,” he said. “He heard the noise of gunshot and, when many would run away from it, he ran toward it to make other people safe.”

Not even 24 hours ago, we posted an article discussing what we’ve learned since Sandy Hook and what we’re doing about it. Well, this is a perfect example of something we should be doing across the country.

While you’re here, this is a perfect opportunity to revisit The Illusion of the Gun Free Zone, as it fits like a perfectly matched puzzle piece.

Share this with as many people as you can, because these are the stories that don’t stay in the headlines for very long. It’s extremely important that people see these mass shootings when they end in this fashion. The media tends to give much more attention to the shootings that have a higher death toll. The reality is, the story above should have more coverage because of the low death toll and praise the officer for defusing a horrible situation that would have been much worse.